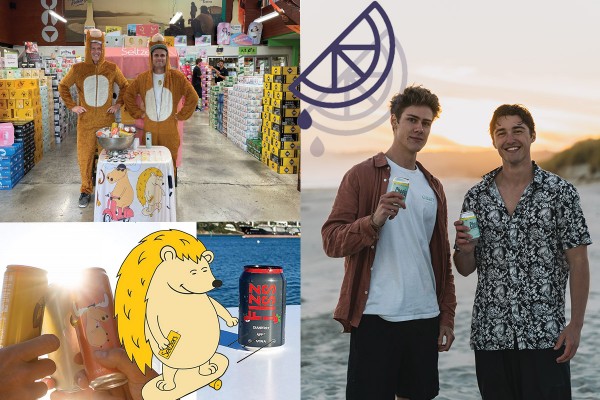 Booze Tycoons: The Otago students who started their own RTD companies

Gone are the days when chugging back an RTD meant looking like a 14-year-old aching for a scrap at a Palmerston North skatepark. Ye olde Codys and Cruisers have been well and truly swept away by a tidal wave of new, hip, and rather tasty competitors.

It is only right that Otago students should have a slice of the action. There’s no more iconic combination than booze, a BCom and big dreams. Critic Te Arohi spoke to three student-run companies who have jumped in the deep end of the fruity, alcoholic pool.

For Fizzliss’ Max Broadhurst, the idea of making RTDs arose from years on Castle Street, drinking the OG spirits and juice combo we all know and love. Max had a brainwave. “Why don’t we just put this into the convenience of a can, to save us from carrying bottles and cups with us when moving from house party to house party?” he wondered.

Spotting a similar gap in the market led Canada-raised Brendan Yielder and Ollie Despatis to birth Cheeky Iced Tea. They set to work after noticing that the hard iced teas and other non-carbonated options, which were taking off in Canada and the USA, were non-existent here.

Jamil Eisele was more blunt about what drove his entry into the wonderful world of RTDs. “I didn't get the job I wanted after uni, or any other job related to my Otago business degree, so I decided to try and mix up a drink that was tastier and less sugary than the drinks I'd been drinking for the last three and a half years.” He convinced schoolmate Sam Bulman to join him, and they formed Greenhill Seltzers.

Having a great idea is one thing, but a BCom can never fully prepare you for the world of business. “What you learn in theory never quite carries over in practice,” said Brendan. “We asked some stupid questions, but we were young, and people are forgiving.” Even tasks that seemed basic had a steep learning curve, he said. “Little things, like figuring out who makes aluminium cans in New Zealand, then learning you buy the cans and the lids separately.”

It’s important to do your research, Jamil and Sam admitted. With Greenhill’s first product, a nine-pack of mixed-flavour seltzers, they “went in pretty blind and did most things wrong.” The result, they said, was a mixed pack that “was complicated to produce” and “nobody wanted”. “It’s hard trying to sell a box of nine drinks to people who want ten.”

Brendan said that Cheeky “have so many exciting ideas all the time [but] we need to separate out what we think would be cool, as consumers of RTDs, compared to what would actually work.” Ollie added that: “When you actually start talking to people, that’s where the challenges come up. They can’t do this stuff in time, or they need more money.”

Max recommended that budding entrepreneurs “do an extreme amount of testing and don’t let excitement get you ahead of yourself. Everything takes time, patience and a creative outlook to ensure perfection, but remember you can’t please everyone.”

Even with all the preparation in the world, though, shit happens. Literally, in the case of Max’s Fizzliss. Shortly after its release, rumours began to spread linking boxes of Fizzliss to having the shits. The rumours blew up with an entire post on Otago Meaningful Confessions dedicated to the issue, along with coverage in Critic Te Arohi and Radio One.

As the news broke, Fizzliss quickly swung into action, admitting in a later Meaningful Confession that they “designed these RTDs to taste like juice but if you're having over the recommended servings (which pretty much everyone in Dunedin does) then that is a heap of fruit juice in one sitting which is naturally going to go right through you, especially if you don't eat fruit regularly.” They have since re-formulated the recipe to take this into account.

Max said the social media comments took a toll. As well as affecting their sales and brand image, “all of the jokes and negative feedback relating to the issue has been a challenge for us as we are only young students with very little experience in the industry,” he said. “Some people don’t understand we aren’t a multi-million dollar company and of course we’re not going to get it right the first time.” However, he put on a brave face. “We are not letting ourselves get disheartened by this and we will come back stronger than ever.”

Thanks to capitalism, the RTD market is dominated by multibillion-dollar multinationals, with the biggest dog of all being Tokyo-based Asahi. This behemoth owns brands like Cruisers, Long Whites, Major Major, Woodstock and Codys, and rakes in over half of the money spent on RTDs in NZ. The rest is mainly sewn up by beer giants Lion (Billy Mavs, Diesel, Berg) and DB (Odd Company), as well as Britain’s Coca-Cola Europacific Partners (Jim Beam, Canadian Club, Effen Vodka). Even Part Time Rangers, arguably the highest-profile student RTD start-up, was swallowed by Brown-Forman (the $50 billion company who owns Jack Daniel’s) in October last year.

It’s enough to make a business student do a cranberry-flavoured shit in their pants, although everyone we spoke to was confident in squaring up to the big dogs. Ollie admitted that “it is a little bit scary.” But he reckons Cheeky have “a lot quicker turnaround, and we’re a lot closer to our target market. We don’t want to be like a group of employees in a big building in Auckland.”

Brendan added, in a phrase that could have been pulled straight from a ’90s motivational poster, that Cheeky are “trying to be the best version of our brand, not a better version of somebody else’s.”

What’s the takeaway for students who want to hit the big leagues with a bright idea of their own? From Jamil and Sam, getting as much wisdom and advice as you can is key. “If we can do it then I’m sure you can too. Don't be afraid to ask people like us for help or advice. We've been through some rough times and we'd much rather you avoided some of our mistakes.”

Max emphasised that getting that real-world business experience was, although challenging at times, the best part. “Take all the risks and ideas you can. I can honestly say I have learnt more about business in the last six months than in my entire business management degree. Don’t be afraid and get motivated. Anything’s possible with a bit of grind and the right headspace.”

Brendan agreed, stressing the importance of multitasking. “One of our greatest assets has been the fact we’re still studying. Rather than trying to recall what we’ve learned, we’ll learn something and immediately try to apply it. Working on a business while studying makes you better at both.”