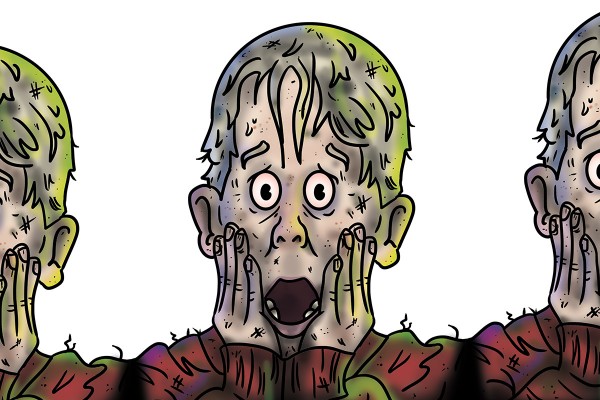 How to Home Alone Your Flat: Prevent burglars with these tips from a psychopathic kid

Flat break-ins in North Dunedin are almost more common than chlamydia. Insurance is expensive and when landlords don’t pay for basic kitchen repairs, they sure as shit aren’t going to pay for any decent home security system. So what can you do to prevent burglars taking your most prized possessions (AKA a giant bong and a Macbook with a fucked up screen)?

You can adopt the techniques of Kevin in the 1990 hit holiday movie Home Alone. Like you, Kevin is just a kid in a house living by himself, but unlike you, he is resourceful and willing to kill his enemies in order to protect his house. I have adjusted his techniques for the particular needs and resources available to your average flatter in Dunedin. I am not sure whether any of this is legal, because Kevin was a little psycho. However, it makes sense that if someone is trying to take your stuff you have the right to seriously maim them rather than just calling the police. After all, no one wants the police snooping around their flat.

Deterrence is the first step in defending your flat from burglars. It involves making your flat appear risky to burgle. If they believe that there are lots of people around, they’ll think twice before breaking in. The following are intended to ensure burglars think your flat is a thriving, well-populated Dunedin slum rather than an easy target.

The party flat approach requires a speaker and the capacity to tactical vomit. The idea here is to make it seem like your flat is inhabited, by making the burglars believe you are having regular doofs. Every day at about 4pm, start blasting DnB loudly, at about a window-rattling level. Make sure to drink a few cruisers and immediately tac-yak them into the bushes outside to add to the illusion. Added authenticity can be added by recording and playing back girls screaming obnoxiously at about 9pm, and then crying and having breakdowns at about 9:15pm.

Another easier option is simply to make your flat as disgusting as possible. This approach aims to deter burglars by sheer smell and repulsion alone. Strategies include leaving rubbish in hallways, vomiting and pissing outside your flat, leaving month old leftovers in the fridge and allowing vegetables to rot in the bottom drawer.

Really you should have fun with this one and be as creative as possible. However, this approach requires a high-level commitment to be effective, bearing in mind the low standard of hygiene that the burglar will already be expecting from North Dunedin.

Detection is key when trying to defend yourself and your flat from burglars. If someone is entering your flat through the side window, you need to know about it. The following are time-tested, sure-fire ways to detect unauthorised access to your flat.

For this technique you need some string or rope and a shit-tonne of empty cans. Fix the string to the top of the door and tie cans down the string at regular intervals so that they are touching one another. Repeat this process until the can-strings cover the entire entrance. When a burglar tries to enter they will bump into the cans which will then make a loud clanging sound immediately alerting you to their presence.

An alternative detection option is to balance a box full of empty bottles on top of a slightly open door. As the burglar enters the bottles should fall making an extremely loud noise and hopefully doming them too.

Traps are the next step in securing your flat against unwanted interference. Detection is all well and good, but convincing the burglars that you’re a psychopath is all the better. By placing traps at strategic locations you can ensure that your burglars become your victims.

The classic option is to simply spread broken glass around the entrances, as the burglar tries to enter, hopefully they will cut themselves and leave. Plus you might get their blood for DNA evidence or voodoo dolls.

A more advanced option is to set up a trip-wire which triggers heavy objects to swing towards the intruder. There’s definitely some YouTube tutorials out there on how to do this. If all goes well, this will either maim them or scare them enough that they can no longer rob your house.

Strip an old toaster oven down so that the grill wires are exposed. Wrap the wires a few times around a door handle you have selected and voila! Any unfortunate burglars or innocent parties that happen upon your residence will receive a nasty surprise.

By feeding the naturally occurring black mould in your flat, you can make entire areas toxic. All this requires is a frequent spray of water and sugar on mouldy areas. Within a few days the room in question should be uninhabitable and any intruders will receive a chronic respiratory illness. Just make sure you’ve got an effective gas mask to protect yourself from the toxic spores.

If all else fails and the burglars are still coming, you have two options: Fight or flight.

Start off with projectiles to weaken the burglars. Throw text-books and other heavy items. Make lots of noise to confuse them or sneak attack by hiding in cupboards. Grab the nearest sports equipment such as a hockey stick or a cricket bat, and go hard. Aim for weak spots such as the head or groin. Try and position yourself on the high-ground or behind furniture-barricades if you can. This will usually be enough to scare away even the most determined burglar. However, if you don’t succeed, you can always leg it.

If you have encountered unstoppable burglars who have endured your traps without fear, your only option may be to flee. At this point, the traps you have set out become a double-edged sword, as they could maim you while you try to escape.

A zipline is always the safest exit option as it means you can quickly, gracefully and silently exit your doomed hovel. The zipline can also be cut behind you preventing the intruders pursuing you.