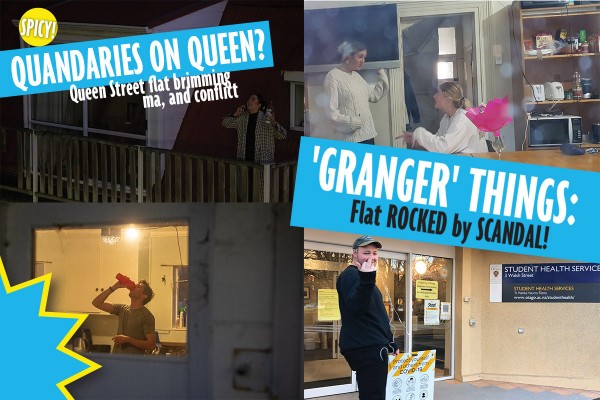 Critic Te Arohi offered to treat two lucky flats like the British Royal Family. Instead of providing them with billions in inherited wealth and a sense of ownership over entire countries, we followed them like paparazzi for a few days and made wild and problematically intrusive speculations about their personal life that The Sun, The Daily Mail, and TMZ could only dream of. Very little of what you’re about to read is true, but it sure makes for two scandalous stories.

This week, we checked in on local celebrities Drew, Iain, Annalise and Grace. We caught them at their weakest, most tender moments — and what we uncovered will shock you.

Iain was spotted early this week attending an appointment at student health. He looked stressed, and he sure wasn’t happy to see us there! When asked what he was in for, he said “none of your bloody business, leave me alone!” His Google search results tell a different story …

The flat boast about their high scores at Dunedin’s toughest pub quiz, but maybe it’s because they’re getting a little help from Aunty Google. We spotted Drew doing something sly on his phone during the toughest round of the night.

We watched Drew come back from one of his three daily runs and gym trips to make a protein shake. Gotta keep that hot bod in shape, but it looks like he’s getting a little extra help from a mystery powder. We saw the athlete crush up a pill and pour it into his shake before sitting down to play competitive e-sports. He swears that he’s “not doping” but we have our doubts!

Grace: Another Week, Another Meltdown

Always the drama queen, we spotted Grace on her balcony late at night, bottle in hand. She was having a heated argument with a mysterious caller, who we couldn’t identify because we couldn’t tap her phone in time. She spotted us and rushed inside, but not before we heard her say “I know it’s long and hard, and I know it’s gonna fuck me this weekend … I just don’t think I can finish in time!” Sources close to her told us that she has an assignment due Monday.

Leaked snapchats from Annalise show that all is not well inside Granger Things. We camped out late at night to catch some drama, and what we found shocked us. Annalise was seen consoling a distressed Iain … holding what appeared to be a pregnancy test! That would explain Iain’s trip to student health, as well as his recent trips to the chunder bucket. But parent-to-be or not, his mess in the kitchen is still driving Annalise up the wall. We detect tension brewing, along with Iain’s baby!

Grace, Claudia, and Lizzy’s living situation seemed stable at first. But our determined reporters soon found that scandal was lurking just below the surface of this supposedly “quaint” and “friendly” flat.

Indecent Affair with a Flatmate's Dad?

Snapchats leaked to Critic Te Arohi reveal that trouble started brewing when fame went to flatmate Grace’s head. The fame, gained from an illustrious flat collection of Whittaker's wrappers, sent Grace spiralling on a night out. She found solace in kissing a dozen breathas, and then fucking a verified DILF. Mamma mia!

Salacious rumours started to spread that the dad that Grace had hooked up with on her wild night out was none other than the father of Claudia, her flatmate. This hot goss started to seem more and more like verified truth as further leaked Snapchats reveal Grace pining over the one guy who ever treated her right: Claudia’s dad.

Claudia Flips Out After Learning the Scandalous Truth!

Flatmate Lizzy told Critic she’d “had enough” and was going to sit Claudia down to tell her the truth. Uh oh! Lizzy shared with Critic a photo of Grace with Claudia’s dad, exposing further evidence of an ongoing affair between the two. Critic photographers were on the scene, capturing Claudia’s heartbreaking reaction to the news, as Lizzy revealed that Grace was fucking her dad behind her back. Wowza!

Losing her temper, Claudia became enraged and further leaked Snapchats reveal that she threatened to burn down the entire Central Library out of rage. Yikes! It is not known whether the distraught flatmate followed through with these plans, but evidence suggests the Central Library remains intact at present.

Claudia then reached out to an unnamed ex-boyfriend of Grace’s, who told Critic she sent a “you up?” message at 1:38am, and an anonymous source provided photographic evidence of their sordid rendezvous. Ooh la la!

Lizzy told Critic that she witnessed Grace’s former lover “leaving Claudia’s at the crack of dawn”, and “stealing a vape from the flat on his way out”. What a dog! Angry at the alleged vape theft, Lizzy then called a flat meeting and exposed to all the tenants both Grace and Claudia’s recent escapades. Critic photographers were on the scene to photograph the tenants' devastating breakdowns.

Once Claudia and Grace had both wiped away their tears, they turned to each other in anger. Our intrepid photographers captured what happened next from a safe distance. Throwing several punches but landing none, Grace then body slammed Claudia before Claudia managed to free herself. Claudia then pushed Grace to the floor, landing a number of punches to a writhing Grace. The fight continued upstairs, where multiple crashes and bangs were heard from below before Lizzy reportedly stepped in and pulled the two apart. Later photos of the damage show a smashed window on the stairwell and glass on the carpet, dramatic evidence of the struggle that unfolded. That’s going to leave a mark!

Unnamed sources say that Student Support sat the flat down for a long mediation session, and all flatmates are recovering from the conflict, but there are now reports that Claudia’s dad and Grace’s ex have been seen together walking through the Dunedin Botanic Gardens, holding hands... Spicy!