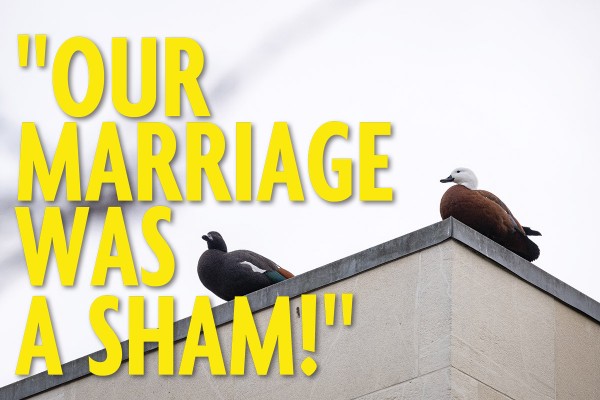 “Our Marriage Was A Sham!”: BOMBSHELL interview reveals SHOCKING details of Bill and Bill’s messy divorce

The Bills have divorced, Critic Te Arohi can reveal. When first contacted for comment, Bill insisted the divorce was amicable, but a later interview shows that the truth is far more complicated. We sat both ducks down for an exclusive tell-all interview. Shit hit the fan, and the truth finally came out. Read on for more.

“We still love each other and will remain close friends. There are no hard feelings or drama, it's simply just time for us to go our separate ways in life,” Bill Billsbury told Critic. But shocking confessions from anonymous former associates and other inside sources paint a very different picture.

Rumours that the prominent couple had split were first reported in April after they’d been seen together less and less frequently. The ducks confirmed to Critic Te Arohi on Wednesday that they had filed for divorce in early 2021 as they have “grown apart over the years”.

Bill Billington and Bill Billsbury have been a cornerstone of the Uni community since they publically got together in 2018. The Bills met during a chance encounter outside the Richardson Building, where they both were enjoying their favourite pastime: Ankle biting.

“I just saw the way he, y’know, reached out his neck to bite this lady’s ankle, and I just knew he was the one for me,” Billington, who was already well-known as a bi icon on campus, said in late 2020. A former associate of Billington told Critic that later that very afternoon they stole dumplings from freshers outside The Dumpling Lady. It was “love at first bite”.

Their sizzling romance could not be contained, and Billington shocked fans weeks later by announcing that he had left Fiona Featherfingers, his girlfriend of two years. He came out as gay. He said he would be flying to Mosgiel to elope at a destination wedding on the Taieri River. Bill and Bill were inseparable, and the definitive hottest item in town, ever since.

Bill and Bill have made a name for themselves as fashion icons, food critics, and queer heroes. Bill Billington released a branded line of male colognes, with fragrances including “The Leith After a Storm” and “Castle Street Gutter”, while Bill Billsbury has put out two EPs to critical acclaim.

Critic interviewed the pair in August 2019, under their aliases Samuel L Quackson and Quackie Chan. Soon after, they were crowned the “Best Dressed Couple on Campus”. But these stars burned quick and hot. The Bills had reached their highest heights, and there was only one way to go: down.

The couple were marred by scandals in 2020, including an alleged kidnapping and a public meltdown. In July, the Otago Daily Times recorded Bill and Bill on a rowdy day in town, walking around central Dunedin, causing a scene at Kiki Beware, and allegedly intimidating a human baby. The viral reports drew ire from Bird Rescue Dunedin, who believed the ducks should not be wandering around George Street with such swagger.

Bill and Bill were relocated to Tomahawk Reserve in what many supporters described as “a birdnapping”. A campaign by avid fans that has since been compared to the international #FreeBritney movement convinced OUSA to informally adopt the couple. They managed to return to campus relatively unscathed, although both Billsbury and Billington refuse to talk about this traumatic period of time.

Late in 2020, the influential couple muscled their way into an interview with Critic on a piece focusing on the stray cats of North Dunedin. When they were told they were “clearly not cats”, Bill Billsbury flipped out. “Fuck this, fuck you,” he quacked, shaking. “I’m sick of this fucking town anyway.” Eventually his husband calmed him down and they apologised to Critic, explaining that the stress of their relocation, and their relative lack of publicity and fame during the second half of 2020 had taken a toll, but they “were working on it together.”

But it would seem that they didn’t work hard enough. After a tough 2020, rumours spread in early 2021 that there was trouble in paradise. A colleague of Bill Billsbury said that Billsbury had complained to him about seeing less and less of Bill Billington in recent weeks. “All he goes on about is how his husband is constantly coming home late, never making time for the two to frolic together anymore, and was always spending far too much time at the office. Personally, I reckon he’s busy at the pokies.”

A resident of Unicol, where the couple like to waddle on their nightly walks, confirmed that the two ducks are having a “rough patch”, and that “they fight all the time.” “It often keeps me up at night” she said, “I can’t sleep knowing the things I’ve heard them quack.”

In a mysterious call to the Critic newsroom, an anonymous source accused Bill Billington of cheating on Billsbury. When pressed for more details, the source whispered “there’s another woman. That’s all I can tell you.” Without another word, she hung up the phone.

To top it all off, an inside source leaked to Critic Te Arohi a secret phone recording obtained from Student Health through covert (but definitely legal) methods that shed new light on the situation. We interviewed the Bills to see if the anonymous rumours were true. But little did they know, we had a bombshell to drop of our own.

Critic sat down with the Bills to ask about their situation. At first, they denied allegations of trouble, but Billsbury grew increasingly agitated. “No, there’s something going on,” he finally said. “We’re not birds of a feather anymore. Bill is growing apart from me. There’s nothing I can do, and I don’t know why.”

Unbeknownst to the Bills, Critic knew exactly why. Critic obtained audio recordings of a woman on the phone with a medical professional. She was overheard seeking medical advice about the gestation of a half-duckling baby. Critic denies allegations of phone-tapping.

We played them the tape.

Billsbury was stunned. Billington broke the silence. “I guess there’s no point in denying it,” he said. “Our marriage was falling apart anyway. I just wanted some action. She was right there, and we had been drinking, and one thing led to another, and I just … well. I suppose you can see what happened.”

After this shameful confession, Billsbury spat back “I don’t see how you could do this to me! To us, Bill. I can't even look at you anymore. Is this why we’ve been so distant recently? Was our entire fucking marriage a sham? I left Fiona for you!”

But the tape wasn’t done. Further audio reveals that the woman, presumably on the phone with the avian equivalent of family planning, struggled to identify the father of her child. “I actually don’t know who the father is,” she told the listener, “I just know that he was about 45cm tall, dark, and handsome, and his name was Bill. Oh and his dick was shaped like a corkscrew.”

“You fucked a human woman Bill? What the fuck is wrong with you? How did you even find a fucking corkscrew-shaped condom?” Billsbury screamed at Billington. Billington looked away. “I have needs, Bill. Human needs. There’s only so much waddling around in mud and eating scraps I can handle. Harlene treated me right. I can’t help it. This is who I am.”

The last time a human-animal celebrity romance got this much publicity was in The Bee Movie (2007).

Fearing backlash, the woman on the phone decided to quit her position and move to Australia. She intends to keep the child. Reports suggest that this woman played some sort of higher role in University administration. Nothing more is known about the woman, her whereabouts, or what she plans to do with the duck-child.

A close friend of Billsbury revealed to Critic that, in recent days, Bill and Bill have met up on numerous occasions in the dead of night. “They definitely haven’t resolved what happened between then and they won’t exactly be getting remarried anytime soon. Billsbury is still furious and he has every right to be in my opinion,” the friend said, “but I guess the cold Dunedin nights get lonely for everyone, so they’re still, well, cork-screwing. Just fuckbuddies though.”

Critic Te Arohi could not reach Billington or Billsbury for comment on this final twist. It is understood that divorce court proceedings are ongoing.