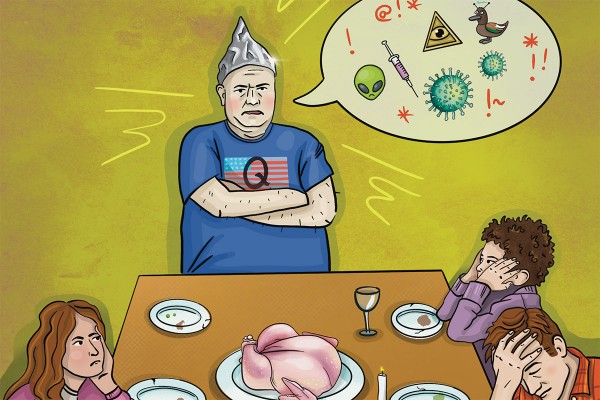 “I Can’t Be Fucked Trying to Convert Him”: When Your Family Members Are Conspiracy Theorists

Extensive “research” during lockdown revealed a terrible secret to Carlos’* uncle. “The sun is sending diseases into our atmosphere because it’s losing energy and going out.”

It seems everyone has that uncle or kuia, gong gong or tita: one moment, they’re “doing their own research,” and the next, they’re railing against Comrade Ardern and her nefarious plan to implement fully automated luxury gay space communism. Conspiracies can be a good laugh from the outside looking in. But students who watched their own family members sink into the abyss of Covid conspiracy theories don’t feel so good about it. Most of them have given up even trying to talk sense into their relatives.

Carlos certainly doesn’t think his uncle will stop believing in conspiracies. He said that when his uncle first came to him with these theories, he “just zoned out because I didn’t want a bar of it.”

Then he started trying to talk sense into his uncle. “YouTube is the last place to get info on anything except a mean student meal recipe,” he told his uncle, trying to guide him towards more credible scientific articles. He felt he couldn’t get far, and eventually just threw hands. “These kinds of people just see things as they are on the surface and don’t trust intangible evidence. In the end, I just can’t be fucked trying to convert his beliefs, they don’t have an effect on me. I guess it’s just a thing for him to get excited about, like a little cult where he thinks “I know the truth.” I’ll let him live in fantasy land.”

For Milly’s* mum, the spark was last year’s lead up to lockdown, when life pretty much ground to a halt in the space of one week. “My mum got really scared about the first lockdown and fully freaked out,” she said, “so I think believing that it’s actually a conspiracy theory helps her keep calm.” Over Level 4, Chorus (who runs most of NZ’s Internet network) reported a 36% spike in Internet traffic. This huge rush online, especially from a lot of people who may not have used the Internet much before, creates problems.

She believes in the classic theory that “Covid-19 is caused by 5G,” but with the added twist that it is an “atheist virus”. Milly says that even having health professionals who work on the frontlines within her family couldn’t stop her mum. “They’ve tried their hardest to explain what it is, but she sticks to what she wants to believe.” At the end of the day, Milly came to the conclusion that “It’s okay to leave them to their own beliefs, so long as it doesn’t harm anyone else.”

Angela’s grandma at least believes that Covid-19 is real, and is even willing to be vaccinated. But her grandma’s distrust of government “got progressively worse over lockdown, being isolated and only having access to right-wing/conservative media.”

As Covid cases began to fall in July and life slowly returned to normal, the lingering distrust remained. When Angela’s grandma didn’t receive her regular mail on time, after hearing on the radio “that there were Covid cases at a post office and the workers were on a strike,” she put two and two together, reasoning that “Jacinda (who is a communist in her opinion), and the government, were lying and covering up Covid cases. So she walked around town, and called people, asking if they were getting their mail, and when they said yes, she’d come up with excuses for why they might be getting their mail — because ‘they shouldn’t be, there’s a strike.’”

Like Milly, Angela did try to convince her grandma at first, only to be rebuffed with “facts”. Her grandma said that the UN, being a “communist organisation”, could not be trusted, and neither could the Government, “because they were working with China and the UN to further their (unspecified) agenda.” With her aunt egging her grandma on, sharing ideas that “Covid-19 was manufactured in a lab in China,” Angela eventually felt like she had to give up.

“If she’s willing to get vaccinated, there was no point in trying to set her twisted ideas straight,” she told Critic Te Arohi. “With the amount of distrust she has in the current governing bodies, there’s no amount of arguing you could do without discounting her lived experiences, so we now just let her be.”

Joe agrees. His aunt, after watching heaps of “doctors” on YouTube, “believes that the Covid vaccine has special nanoparticles in it, which will ‘alter’ anyone who takes it in the next 20 years. And basically all of the other vaccine conspiracies too.” He reckons that “usually the type of person to believe this stuff is the type to fall victim to conspiracy theories and really invests themselves into believing the lie. It becomes super hard to talk any sense to them,” he said.

After “multiple family members approached me to talk about Covid-related theories”, on everything from its linkages to 5G to the safety of the Covid-19 vaccines, Adam decided to try and take a more systematic approach.

“Never target (or attack) the person holding the belief. Just focus on their reasons, and why they think the conspiracy theory is true. Help them to utilise tools and think critically in order to challenge these beliefs,” Adam said with Zen-like self-discipline.

“Tell them you understand why they might hold the belief. Then sit down and chat about their reasons for the belief. They will probably show you an article or video featuring an ‘academic’ or ‘scientist’ ... Encourage them to look critically at all sources of information, to check that the supposed ‘academics’ are actually well-recognised and respected scientists. Show them how to look up the impact factor of a journal and assess the quality of its work.”

Dr Fabien Medvecky, from the Centre for Science Communication, says it’s important to realise “there are many reasons for being drawn into conspiracy theories, [and] some are easier to address than others. If it’s because of an underlying concern that can be easily identified and addressed (e.g. how quickly the Covid vaccines seemed to have been developed), it’s pretty straightforward. If it’s deeper than that (distrust in state and official authorities more generally), then it’s more difficult.”

For both groups, though, Fabien says similar rules apply. Like Joe, he thinks it’s really important to assess the reasons why they believe what they believe, no matter how ridiculous they seem to you. “Let them speak. Understand where the false belief comes from… Find out where they get their info and who they trust.”

“Once you understand the false belief, you can't just remove it. You need to replace it (or else another belief, likely another false one, will replace it).” Fabien points out, though, that you might not be the right person to be doing this. “You’ve got to have the right messenger to respond to their core concerns,” he says, and in some cases that will mean tapping out in favour of someone else — who, ideally, isn’t a conspiracy theorist themselves.

Most importantly: “Don't outright try and convince them they are wrong, and don't just correct them when they say false things.” Though it can be tempting to just fact-check and call someone out, at the end of the day, “no one likes to be wrong.”