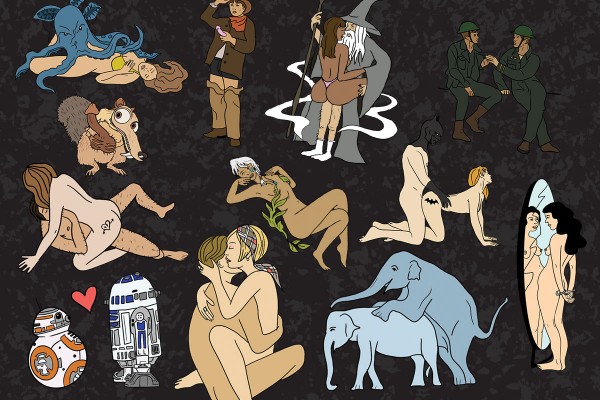 Netflix and Chill: Films reviewed by people who watched them as foreplay

Here are some reviews of movies and TV by people who watched them before or during sexy times. The attention they gave to the film varies based on the performance of their partner. Some were clearly more captivating or capable than others, but the sweet spot for a Netflix and chill seems to be about half an hour: long enough to get some probing cuddles in, but not too long that you forget why you’re there.

Remember this one? It’s that cartoon where Milo is trying to complete the work that his father did. There’s that digger guy that looks like a mole and the French guy who’s like “oh-hoh-hoh, I don’t know what to do with this but I will blow it up!” Shit worked like lube. I think we’d both seen the movie before, but nostalgia alone wasn't enough to stop what was about to happen.

Anything David Attenborough is a classic for this, right? It’s a pretty safe bet. Interesting enough to get the ball rolling, but at the end of the day the most interesting animal body is the one lying next to you.

You’re safe with anything by Dave except for the newer shit because he’s all “the planet is dying, we’re all fucked, yadda yadda,” and that’s a real turn-off, a total anti-boner. But if you’re watching classic Planet Earth, there’s an episode for every occasion.

If it’s a really cold episode, maybe you feel cold, so you get closer together. If it’s a hot one, you get hot, and you take off your clothes. The steamy jungle episodes are always a mood-setter. Or the wetlands one, if you get what I mean. God, I wonder if ol’ mate Dave knows how many orgasms he’s facilitated. It has to be in the thousands.

It’s a British comedy show. Kinda culty, very painfully uncomfortable. It was a bad idea for foreplay. Any episode would have been bad, but to top it off, this was the episode where they ate a dog. So that wasn’t awesome. Yeah, I hooked up with the person, but I can’t really be sure. My mind was definitely elsewhere and it was a very cringey experience, and now a painful memory.

It was the episode with the black and white robot dogs, I think. It was pretty spooky. I’d just consumed a bunch of weed tea with this guy and we put on Black Mirror to set the mood. Horrible decision. It’s not a (sexy) mood-setter at all, and we were stoned, so it just freaked us both out and we just ended up anxious and paying more attention to the screen than each other. Do not recommend. Some of the following episodes did get hot though, and you know we weren’t going to waste that wavy body high.

Lord of The Rings II

I don't like LOTR in the first place and I've already seen it. But he wanted to watch it, so we put it on. It was sort of an awkward thing. I guess the type of person who suggests LOTR as foreplay also isn't usually the smoothest mover. It took ages for anything to get moving but finally he was nudging closer and giving hints and I was like “oh, ok, so you’re sure you don’t want to watch this super fucking long movie for the eighth time?”

Anyway, long story short, it was around the time that Grand Elf (note: she meant to say “Gandalf”) rocks up that things got spicy. I can still remember the scene that was on when this nerd came in me, and it will be forever imprinted in my mind. Thanks, loser. Btw, your bedsheets had popcorn kernels in them and I thought that was gross.

Lasted: About an Hour

The almost-orgy ended when the couple in the flat just got up and left to go to another room together and it all sort of fizzled out. It was a shame. But Ice Age 2 is still a great movie.

Lasted: Over an Hour

I’m not a Star Wars gal. I have nothing particularly against it, but damn, this was a boring fucking movie. All I can remember is this long ass car chase scene through the desert. Also I think I started with the wrong movie, apparently I should’ve started with Episode Four? I don’t get it, but okay.

Anyway, this movie started with little Anakin or whatever his name is. That was nice. But who the fuck is Jar Jar Binks? I wanted to punch the guy I was with because Jar Jar was in this movie. Most annoying character ever. Sex was mediocre. Didn’t even get to the end of the movie, which I hear is the cool part.

Lasted: Over an Hour

We got a full hour and a half into it because it’s a fucking good movie before we realized “oh, shit, right, the movie isn’t actually the reason we’re here.” I was with a mutual friend I’d met on a night out but it was only the second time we’d hung out so it was still early days.

We stopped watching around when Gary Oldman was talking because it was finally a lull in the plot. It was one of the exposition scenes. Not that any scene in that movie is bad, just that this one was slow enough that we actually remembered that we were there to get laid. I’m pretty sure she said something like “did you wanna keep watching?” and I was like “oh yeah. Sorry,” and we got down to it.

The tough thing about watching a series is that you want to, like, critically analyse it when you’re done and that’s tough to do with a dick in your mouth. It’s a shame really, because we were both really into the show. I mean, we lasted like two and a bit episodes, and that’s nothing to smirk at. That’s almost a whole movie. Pretty captivating.

Back to the Future 3

I love this movie, so when a boy asked if I wanted to watch anything, this is what I said. I made him watch the entire movie. It’s a long movie. I made him wait two and a half hours to get his rocks off. He did not enjoy it.

Literally as soon as the credits rolled, bam, that laptop was closed, lights were off, sheets were pulled and his hands were all over me. Within five minutes of that green light flashing I was being sorely disappointed by a boy who had just been cockblocked by two and a half hours of Leonardo DiCaprio. I was thinking “man, I wish this was DiCaprio.” But at 23, I had to accept the reality that I’m a little old for Leo’s taste, I’m afraid. Movie was definitely better than the sex.