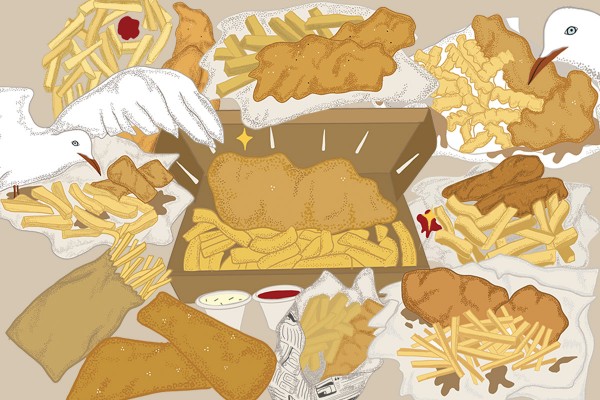 *Disclaimer: Critic did not review Dunedin’s greatest fish and chips in 2020 because there was a lot going on.

Chip and fish. Fish and chip. It can be average as fuck or it can be the food of your dreams. That all depends on where you choose to go. Critic ordered two fish (of unspecified variety) and a scoop of chips from eight takeaway shops in order to take you on a journey through time, space, and grease.

In the words of one Critic staff writer, the chips that Botanical Takeaways offered up tasted like “the mummified Maccas chip I found in my bed two months after I bought it”. While waiting for our order, we noticed that the fish were just sitting in a warmer and we’re still unsure if our fish had been freshly cooked.

That aged vibe summed up the Botans fish and chips. The fish was greasy enough with old oil that you could draw a smiley face on the paper after eating it. Despite the chips looking like a candidate for a World Heritage Site and leaving much to be desired, the fish was well cooked with a dirty crisp to it, and is probably something that you probably wouldn’t mind chowing down on while on the piss.

NEV Takeaways gave us crinkle cut chips. That’s enough to plummet to the bottom of our rankings. Crinkle cut chips do not qualify as fish and chips. At best they can be passably ingested as oven chips, if all other alternatives have been passed over. There was enough grease to soak though three layers of wrapping, a sheet of A4 paper and two newspapers which we laid down on the table. There was too much batter for not enough fish, which was also extremely greasy and soggy. Unless you’re right outside and cannot wait another second to be with your hot chip (which is an understandable state of mind to be in), there’s plenty of better fish in the oil.

Tahuna Camp Store is the reason our fisheries are going extinct.

Tahuna’s not here to fuck spiders. It’s a bit out of the usual campus area, but who gives a fuck? For $5.50 you get the meanest piece of fish in Dunedin and a healthy scoop of well-cooked chips. Walking in, we were a little put off by the selection of lollies at the till. One of them was meant to resemble camel testicles. Another advertised that you would “feel your tastebuds explode.” We quickly forgot about this when we got handed a hefty chunk of the daily catch. It was fried to perfection. Not a single square centimetre was ‘air with batter around it,’ like we got at some other places. It was a true brick of fish. If you had enough of these fish, you could build a decent, but smelly, igloo.

The chips came unsalted, but with salt packets, and tartare and tomato sauce on the house. The lady working the kitchen gave out free chips to everyone waiting on delayed orders, great service. If you don’t stop by next time you’re at the beach you’re a fucking idiot.

Vibe: the last time you were truly happy

Squiddies never fails to hit the spot. But this is an official fish and chip review, so the fact we could only choose between shoestring and crinkle cut fries (we chose shoestring, of course) meant that they slipped a bit in our rankings. The fries were bloody good as always, and were fought over by the Critic staff.

A larger problem was the fish. The uniform, triangular shape suggested no small amount of processing had happened before it found its way to our mouths. While it tasted pretty good, it doesn’t have the true Kiwi fush and chups vibe. It is like the fish from your residential college in first year. However, Squiddies remains a student institution and still offers decent bang for your buck if you’re looking for a feed.

Willowbank always has seagulls around, which is nice. However, a flock of the fuckers divebombed Critic’s car, which isn’t. While we were waiting, we took a moment to take in the dairy’s overly intense fluorescent V-green colour scheme.

The old man behind the counter never fails to ask about your day. It’s nice to have someone checking in, but the counselling might be the reason Willowbank was the most expensive out of the eight joints Critic reviewed.

Traditionally renowned for their chicken and chips, it made perfect sense that Willowbank’s chips were dusted with powdered crack similar to what KFC puts on their chips. When it came to the taste test, we had a diehard corner of Willowbank simps who refused to hear any criticism about their favourite takeaway. Everyone agreed the chips were pretty good, but the fish were the same processed triangles as Squiddies. If you’re in the area, Willowbank is a decent shout, but will hurt the wallet much more than other choices (our order of two fish and a scoop of chips came in at around $13).

Vibe: Finding out you can’t get K2 over the counter anymore, so buying a sugar-free Red Bull instead

After chowing down, the Critic consensus was that there could have been more substance to the chips, as the size meant our scoop of chips was slightly overcooked and the outer layer was tougher to bite through than it should be. The fish was decently cooked, but it was let down by the batter, which was thick and had an oily aftertaste. While an absolutely iconic Dunedin institution, Mei Wah didn’t live up to the hype.

The aura of Great Wall is eerie. While you wait for your fish and chips, you are both nowhere and everywhere at the same time, like you are part of a pretentious art-house film. Life passes you by on George Street, while you stand inside Great Wall, looking at its many different shades of pastel linoleum and four chairs. The liminal space gave the sensation that much like its namesake, Great Wall Takeaways will endure the ebb and flow of empires.

Our chips were coated from head to toe in salt. They were undercooked but had a solid crunch to them. The fish was excellent, with a sublime melt-in-your-mouth texture. Everyone wanted more. Great Wall is a fucking great place to get your fish and chips fix from.

An underappreciated gem of the North East Valley takeaways scene, Hao Chi was pretty bloody good. The chips were cooked evenly and thoroughly, striking a balance that none of the other takeaway joints had managed. They were pretty light colour-wise, suggesting that our scoop had been cooked in near-fresh oil. These chips were also unsalted, but that meant they were the most healthy potatoes we’d eaten all day.

The fish was the right amount of crunchy on the outside but soft on the inside. Aesthetically it looked and tasted like actual fish, which is a win in our books. Hao Chi may not be a place you’ve heard of before, but consider trekking into North East Valley to get your hands on some of the best fish and chips this side of Dunedin.

Vibe: visiting your parents and having your first vegetable of the semester

At the end of the day, Critic now has heart disease, but it was worth it to bring you the top three fish and chip joints in town.