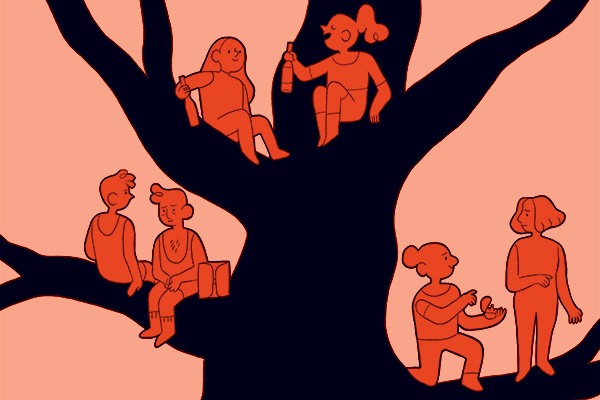 How The Red Card Became a Dunedin Cultural Phenomenon

If you’re a fresher still learning the ropes and fumbling your way around North Dunedin, you may have heard the term “Red Card” being thrown around in conversation and had thoughts like ‘what are they?’, ‘what do they look like?’, and ‘how can they help me get through Health Sci?’.

Red Cards are like Jaden Smith: They were brought into the world sometime in the late ‘90s and they often don’t make a lot of sense.

The basic concept of Red Cards is simple. Once a year, each member of the flat gets one opportunity to pull their Red Card and everyone else in the flat must go along with whatever they say. It’s a dream come true for alcoholics and control freaks the world over.

It’s hard to see the phenomenon of Red Cards developing in any city other than Dunedin. Somehow through pure word of mouth an entire set of guidelines was created for doing crazy and sometimes demeaning things with intoxicating substances and everyone just sort of went with it. You can’t even Google it because you’ll just get a bunch of articles about soccer.

By the early-mid 2000s, Red Cards had become commonplace in flats across Dunedin. By 2004, University of Otago Deputy Proctor Andrew Ferguson was beginning to have reports of dangerous activities come across his desk. By 2009 they had made their way to New Zealand’s other true student city, Palmerston North, and become popular with Massey University students. The rise of Red Cards may have been propelled in part by the university’s crackdown on initiation rituals, providing a new outlet for students to get creative and weird with their drinking.

Technically, you have the power to pull your Red Card at any time and your flatmates must drop everything and obey. However, with exams and tests dotted throughout the year, pulling your card without consultation can be considered a dick move. It’s a good call to run it past the flat a few days in advance to make sure they’re available. Don’t let them get away with shitty excuses though. An assignment due the next day is an acceptable excuse. Needing to catch up on a few lectures and do some shopping is bullshit and you need to put your foot down. It’s a good idea to get your Red Card done in first semester to avoid the busy time of year. “Red Card Season” really starts to hit just before exam time in second semester as everyone suddenly realises they haven’t pulled theirs yet and try to cram something in before it’s too late. Don’t be a slacker; get in quick.

Your next move is deciding how big you want your event to be. Keeping it within the flat is an option, especially if you want to make the challenges really individualised. If your idea involves driving somewhere, it’s best to stay small. If you want to go bigger the usual way is to allow each member of the flat to select a set number of people to be on their team, or alternatively you can just invite whoever the fuck you want. Again, there are no rules.

The rules around Red Cards are intentionally minimal, which allows a world of possibilities constrained only by your imagination. You can be as organised or unorganised as you like.

If you're looking for red card ideas, a classic option is a themed team event. The movie Beerfest is your prototypical example. Each team represents a different country and competes in a variety of drinking events: Beer Pong, Quarters, Flip Cup, Boat Races, Sculling Races, Rage Cage/Flip Cup. One Red Card I attended with a United Nations theme set each national team the challenge of finishing a mini keg in their room before performing a cultural dance for the rest of the crowd. Scavenger hunts are a great team bonding activities, which get everyone out to explore the city. Set them a list of challenges like ‘take a piss in a stranger’s flat’, ‘borrow a condom off someone’, ‘ask someone to marry you’ or anything else your mind desires.

The true beauty of Red Cards is the individual power of the host. Everyone enjoys a structured activity, but organising by committee is bloody tough. Red Cards are a great chance to try out an activity you’ve wanted to do for a while but can’t quite manage to convince people to try. If it’s your Red Card they’ve just got to shut up and listen to you. Play a round of can-a-hole golf, drunk lazertag, try out a weird and confusing drinking game you found online. If you want to, feel free to turn your Red Card into a Green Card, get everyone as high as the Himalayas and go mong out at a museum, play blazertag, or journey to the Whakamana Cannabis Museum.

If you haven’t played yet, I highly recommend ‘Possum’. One of the only drinking games that truly owes its origin to the scarfies of Dunedin, Possum has unfortunately become less and less prominent in recent years. It’s a simple game – you grab a box of drinks and climb a tree. You’re not allowed out of the tree until you finish your box. Getting hammered and climbing around like a monkey is delightfully freeing and will fill you with feelings of pure nostalgia. In the Possum heyday of 2011, Otago hit national headlines as Botanical Gardens staff tried to crack down on players who trashed the place with empties. If you’re going to play, don’t be a cunt. Actually, no matter what you’re doing, don’t be a cunt, advice which applies to most of life.

Another traditional, though less common, use of the Red Card is simply to fuck with your flatmates in hilarious and humiliating ways. I’ve been told of students who blindfolded their flatmates, dumped them in an unknown location, and told them to make it back to the flat, with one caveat; they could either have pants or shoes on, but not both. Losing one makes walking tough, losing the other makes hitchhiking nigh on impossible. A Critic writer who documented the great Red Cards of 2011 reported on two young gentlemen who were presented with tight pink lyrca outfits and a pill of Viagra each, and dropped off at a Unipol pump class.

Red Cards are a helluva good time, but it’s important to stay safe and smart. The Proctor’s office has seen its fair share of fuckups. They provided us with a list of Red Cards gone wrong.

One male student was told to go to South Dunedin and steal a supermarket sign. Unfortunately, like a fucking moron, he got caught. He escaped with a diversion.

One third-year male smashed back a six pack and tried to walk along a corrugated iron fence. He fell over and cut himself, leaving disfiguring scars down one arm and a leg.

Another student was locked in a cupboard – unable to be released until he had crushed a set amount of liquor. He choked on his vomit in a confined space and, with no one around to save him, he very easily could have died.

Scariest of all was the story of a first-year student who just five months earlier had undergone major surgery and was still taking heavy-duty drugs to aid his recovery. None of his friends knew about this. After being made to smoke a bong, suck down some bevvies and funnel a bottle of red wine he lost consciousness, fell to the floor and began to froth at the mouth. A flatmate managed to call an ambulance in time, but he was left with a long stay in hospital and a very near death experience.

‘No means no’ doesn’t just apply to sex, it applies to drinking too. If you have a medical condition or if you’re feeling like the booze is hitting you a bit too hard, it’s totally fine to jump out for a round. If you’re in charge and someone tells you they can’t handle it, respect their call.

Deputy Proctor Ferguson puts it simply “Red Cards are fine, as long as they are not dangerous, illegal or objectionable. There are a million-and-one things that extremely bright young people can do that are imaginative, and that don’t involve someone getting hurt. Don’t be fooled and protect yourself; no-one can make you do anything you don’t want to do!”