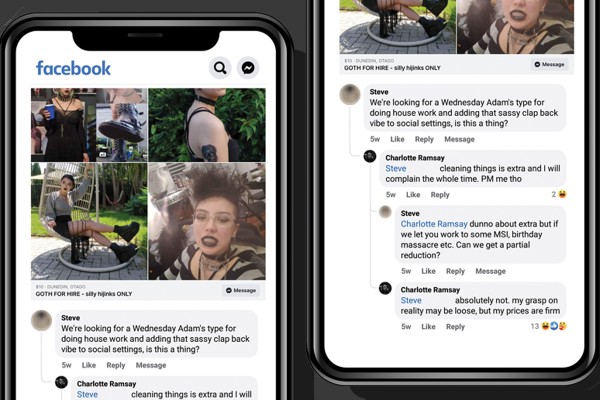 For such a wonderfully gloomy city, it’s surprising that Dunedin has less of a goth scene and more of a goth single frame. As a goth that crash landed in dunners I felt an immense sense of duty to my newfound home, as well as a burgeoning megalomania. In a sea of Glassons and Dickies, I made it my mission to be the most gothic, genderqueer, chaotic-evil burnout with dry skin in all of Dunedin–nay, the Otago region. This seemed easy enough at first, but my inner Ebony Dementia Dark'ness Raven Way cried for more. After all, I had a service to provide, and not just a funeral one.

Have you ever had to take a long, hard look at yourself and wonder what your worth truly is? Not in some kind of self-acceptance metaphorical way, no–I mean when you reach the final step of your mortal coil and Anubis weighs your heart on a scale. What are you worth in gold? How can one ever truly assign a price to a human life?  After a lot of self discovery, I assigned myself the price of ten dollars an hour. My product? Goth.

Armed with a chemical addiction to Facebook Marketplace, I realised the relative dearth of goths, punks and alt kids in the local scene left open a crucial niche that I could financially exploit. Let's face it–anticapitalism is great and all, but a bitch loves money. Feed me to the pigs in the revolution, I don't care. So, as the money-grubbing shill I am, I uploaded some pictures to the infamous Facebook page 'Otago Flatting Goods', captioned the listing "Goth for Hire - $10/hr" and let the comments roll in. It got Zucced in less than 12 hours because of systemic goth oppression, but I sure had my fun until then, and even found myself some clients.

My first serious inquiry appeared within minutes. It was dangerous, sure, but being bloodbound by the gothic code I was forced to accept the job. The location: riceball hotspot Tokyo House. The target: local funny guy, Reid. The mission: crash his party and sing him happy birthday. I took some creative liberties and decided instead to scare the everloving shit out of him or get banned from the venue in the process.

In full murderous-Victorian doll apparel, scythe in hand, my mum (bless) dropped me off outside Tokyo House. I psyched myself up to once again make a grown man cry. As promised, Reid’s back was facing me. I fumbled with my scythe and began, regrettably, to sing Happy Birthday, which – little known fact – is the longest song ever written, probably. “She wasn't here for my company, she was here to strike the fear of God into me”, Reid later said, after recovering both physically and emotionally. My last minute decision to sing was solely so I could deliver the line: "Happy birthday, Reid. What a shame it'll be your last" as I drew the scythe from behind my back and held it against his chin. The silence was deafening, eventually broken by confused laughter and murmurs of "What the fuck what the fuck what the fuck." 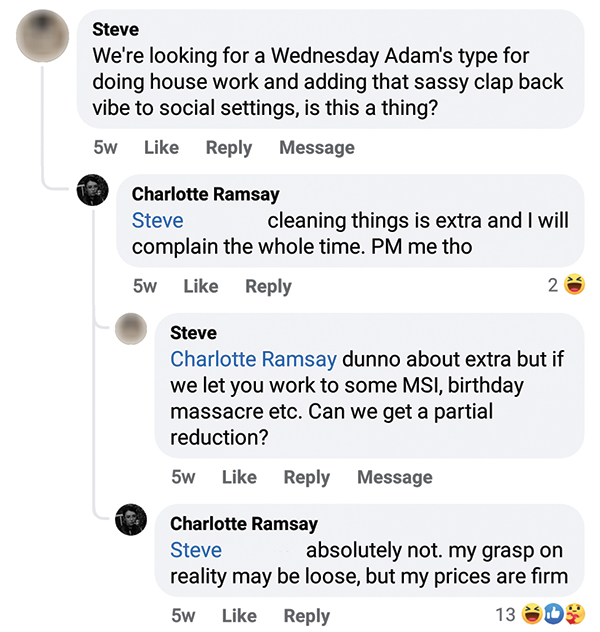 To my surprise, another clientbase soon opened up: cool librarians who just wanted to hang out and piss up with me. Whether this was out of pity, curiosity, or camaraderie, I didn’t care. I was up for the challenge. Colleen thought Goth for Hire was “just a joke” at first, but her “girlfriends thought it was awesome and begged to meet”. I prepared for my one-hour job by spending two hours shoving myself into a corset and spiking my hair – the flaws in my business model quickly becoming apparent – to arrive fashionably late at the house of our gothee. Colleen recalled that “spectacles and studs flashed in the light of my hallway… opening the door, she swept past on the bloody wings of ravens and silent screams of the damned.” No ravens were harmed in the making of this article.

I looked the part for sure, but my extremely gothic and sexy social ineptness was making me anxious as fuck. What could possibly lie ahead? Murder? An orgy? Murder orgies? I could not have been more adjacent to the truth. Colleen greeted me and led me up the stairs to where her friends waited patiently with bottles of moscato and… the unmistakably translucent yet attractive face of Kristen Stewart on the big screen, like a bowl of plain porridge, but one that you want to fuck. It was a Twilight drinking game. Not just any drinking game – one designed for adult women with substance abuse issues BY adult women with substance abuse issues.  “I said a silent prayer,” Colleen later said, “and the night was on.” Whenever a vampire hisses, drink. When Edward is a creep but it’s romanticised, drink. When Bella touches her hair, drink. If a vampire sparkles, fucking chug. You didn’t need to be a diehard Twilight fan to know that this level of rark won’t make you Team Edward or Team Jacob: it’ll make you Teeming with dead liver cells and bisexuality. You could see my skin flushing under the kilo of makeup I was wearing. The rest of the night was a blur, but I have vague memories of eagerly making plans to do a full moon blood ritual together. “Worth every cent and more!” said Colleen. Another rave review. 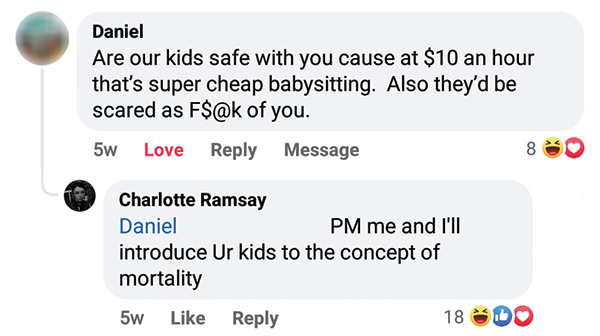 Just as it looked like the Goth for Hire sensation had died down, Tāmaki Makaurau spaghetti western surf punk noise band Jang happened to be touring in Dunedin. Frontman Paddy hit me up on Instagram and we brainstormed ideas for my next job. Unfortunately, most of our ideas were unpublishable, and some were straight up illegal, so as far as Critic is concerned I did not go ahead with them. The best option, then, was to hire me for door duty for their gig at the Crown, which was not illegal, unless I got drunk and creative. But for the low, low price of $10 an hour, who wouldn’t want a 5’4 easily distracted gothic bouncer (gouncer)?

Jang specialises in the kind of loud fast-paced chaos that makes my ears go brrrr, so I was more than happy to also provide the service of being the spikiest person in the mosh, as well as working the door in between. This was highly appreciated, Paddy said, as “The street cred added through increasing the goth/breather ratio is indispensable in this line of work, especially at this price… Not very good at door duty, but [they] did bring their own weapon so that’s a plus.” All entrepreneurs have their hurdles, and mine happens to be the fact I’m an absolute munter. I forgot to charge some people and may have insulted others, including some adoring fans who recognised me from the Facebook post. Jang’s goth highlight of the night was me (allegedly) vandalising something containing hate speech, and the second gothest was when I “whipped out the butterfly knife the FIRST time”. Everyone knows goths get stabby on RTDs. “I was like ‘am I in over my head here?’” said Paddy, who ultimately decided that “I’ll be recommending this service to friends and whānau.”

With that job done, I was hungry for more. Enter Tama: Comedian. Metalhead. Fresher. Incidentally, three social groups possibly even more polarising than goth. He was keen to hire me to take some cursed candid photos of him, but after a healthy amount of peer pressure this evolved into paying me to straight-up stalk him for shits and giggles. Not just around campus, no no; to truly ensure the Goth for Hire metric of quality, he wanted me to test the limits of his personal security to find out where he lived and worked. “The ‘Goth For Hire’ business fulfilled the dream of any loser fresher: to be followed around by a goth girl,” said Tama. He saw it as some lighthearted fun he’d get a story out of later, I saw it as an opportunity to become a cartoon supervillain and instill genuine terror. Armed with two weeks and the sparse info I’d picked out from our conversations, I was ready to trespass (consensually). 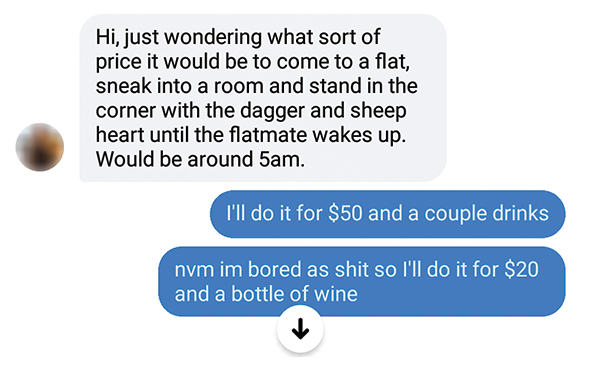 I’ve always suspected that if I were a boy-crazy teen instead of an outpatient-crazy one I would have made a good stalker. My natural state is lurking, and what little empathy I have I use for evil. I don’t go to art exhibitions, I only go to art voyeurisms (jealously watching Polytech students from afar). It wasn’t just about the money, anymore. No. It was a deep-seated, primal need to max out on gothic clout (glout) by hunting a fresher for sport. “I became the envy of all anime dweebs on campus,” said Tama, after I ducked under the ChaTime tables to ambush him in the Link. I tracked down his Facebook friends and interrogated them mercilessly, and to be honest, they were concerningly eager to sell out their friend for nothing in return. One of them gave me Tama’s timetable, which would have been useful if I could physically bear to be around the Comp Sci buildings. Soon I was able to narrow down his location from a city to a suburb to a block. By going to his neighbourhood when I knew he had band practice and listening out for live music, I found his house. Within a week I held his whole schedule in the palm of my hand. Luckily for Tama, and for mankind as a whole, I have raging ADHD and cannot commit to my own schedule let alone the schedule of others, so he was safe. Still, this received a “10/10” from Tama. “Scared my friends, and scared me a little too. Stalker goths are truly no joke.” And with that, I hung up my chrome-spiked hat. buried the hatchet. And scythe. And butterfly knife.

Dunedin is a city of Gothic Revival architecture, but its people are in desperate need of a gothic revival, too. As proven objectively by the groundbreaking Goth for Hire™ phenomenon, goths are a crucial part of the local economy, cycling student loan money to fancy platform boots, which trickles back down when the boots are later sold secondhand to other students, probably. While I could take this opportunity to talk about the current state of goth culture on the whole and the fetishisation of femmes in alternative subcultures, I’d much rather declare myself a Gothic Revival landmark and therefore protected under heritage legislation. So if you ever see goths scrubbing black lipstick off their teeth or feeling each other up in the art gallery, just know that you are witnessing a historical event.

And as for myself, I learned a valuable lesson: I may have been a Goth for Hire™, but to be goth at all is to be free. Amen.