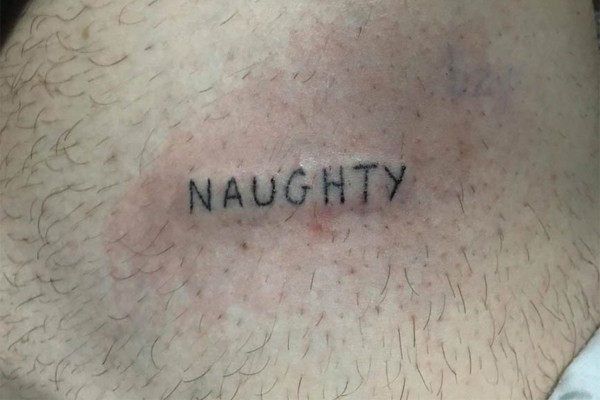 IT'S NOT THAT DEEP - stick n pokes, a guide

Stick and pokes are nothing new. Egyptians were doing it thousands of years ago, however recently it seems a bunch of bored students are too. Whether it's Caitlin who wants to spice up her personality by getting a lightning bolt tattooed on her finger, or your local breather with his nickname 'Bull' on his bicep, stick and pokes are clearly appealing to students. But what is a stick and poke? Is it worth the cheap price for the memories and potential infections? Critic spoke to a range of students about their experiences with the party pastime.

Picture this: you’re absolutely slaughtered at a flat, and someone brings out needles and a pot of ink. You think, why wouldn’t I tattoo a portrait of Bart Simpson on my ass? It’s clearly an excellent idea. Before long, you’re having your ass grabbed by a random girl who’s jabbing at your left cheek with a needle you swore she used on your friend 10 minutes earlier. But hey, carpe diem, I guess. Rather than at a traditional parlour by a professional, it can essentially be done anywhere, at any time, by anyone. With a singular needle and pot of ink, the stick and poke method is relatively easy and cheap for anyone - especially BAs looking to ‘express themselves <3’. The needle pokes individual holes in the skin at a time, rather than a tattoo machine, which pulses the ink in rapidly. Usually for more simple designs, the stick and poke method sticks to the basics, and doesn't go nearly as deep - so don’t complain it hurts, because it doesn’t. You’re just a little bitch. They can last for as long as 6 months, a year, or forever, depending on how much your artist hates you.

We spoke to Dani (@inklessdani), a student with a stick and poke side-hustle. From starting her business in early 2019, Dani began with humble materials from AliExpress. "You can get them from any tattoo shop," she said, "but AliExpress is cheaper and is the same grade as the professional ones". She uses 3RL needles, which have three small prongs in the shape of a microscopic triangle that holds the ink, rather than needing to re-dip in the ink with each poke. The process involves sterilizing and shaving the subject’s skin, and then tattooing - no deeper than 2mm. With such an easy process, Dani has given stick and pokes to dozens of people, usually friends looking to get something dumb to laugh about.

"It's not a life-long commitment, cause they don't last forever. So, it's for people who can take a joke, people that like don't take things too seriously. Y'know, some of the tattoos that I've done are so bad - like, you're not gonna want to show it to your kids or anything when you’re an adult, but it's not gonna last, so it doesn't matter."

When asked what her favourite stick and poke has been so far, she immediately recalled a girl wanting a stick and poke to show to the guy she claimed to have "in the bag for a root". She ended up having "hey x" tattooed just above her vagina, as a surprise for him when she “inevitably pulled”. "She had shaved, but dude, imagine pushing the needle down where there's a hair already that’s been cut. Ugh. I tried to work around that,” Dani laughed.

Other than that, she's done phrases like "Fuck it", “Naughty”, a lot of smiley faces, star signs, and other basic stick and pokes you would have seen on Pinterest. Her one rule? No couple tattoos. "Also, practice on fruit. Or yourself! I didn't practice at all, just went straight for it the first time I did it. My friend didn't really care though, but now she has two thick lines on her hip that's definitely lasting forever."

When Otago students were asked about their stick and poke stories, the overwhelming response was "I was drunk" or "for shits n gigs". From the classic sad/happy face, a wine bottle, or phad thai on their foot, the goal is to get something that'll give you a chuckle. When asked if they'd recommend others to get one, the most popular response can be summarised as "fuck it. Why not?" A first year student said the pain of getting his tattoo (a tree in a box) wasn’t bad at all, just a prick. Another student, who got a tattoo of smiley faces with crosses for eyes, compared the pain to “having to tell people you’re from Gore”. Phad thai tattoo girl insightfully said she got hers because “I love phad thai”. A young man with ‘BZY’ on his thigh described stick and pokes as “a great way to suss priorities”. As something semi-permanent, the general consensus among students is that it's a great story and university experience. On top of that, there was a surprising amount of girls who found their foot tattoos grabbed them more dms on the down low for money. So if you’re looking to invest in a tattoo, consensus is a foot one is the way to go.

In terms of aftercare, there’s only a couple of rules if you want it to stay. Don’t get it wet within the first week, so maybe bandage it with some plastic wrap. This is because you need the ink to set and for your skin to heal over it to keep it in place. On the bright side, this means if it’s really shit then you can just wash it well before the new skin heals over the wound. Other than that, moisturise and keep it covered for the ink to do its thing.

"It’s a great bonding experience, because you get to see your friends in pain," said Dani. "They're stupid, and meant to be stupid, so just enjoy the moment."

The only advice our resident stick and poke artist has to say is: "I'd say go for it. Sometimes people overthink their tattoos and say 'oh, I want a stick and poke' and then they'll spend hours and hours thinking about it - that’s not what it is, Y'know? Go for what you want, go for what's on your mind, it's not that deep."

Overall, stick and pokes are popular for a reason. You look sick, it’s a good story, and an excuse to show your ass cheek when drunk. As an artist, you can make some money from giving them, and if you’re getting one - well, we know feet pic sales go up. If you’re lost for ideas, go for a stalk on Instagram, or ask your mates for a doodle. Otherwise, make it gauntlet. Whoever flakes on the next night out has to get “Exit Only” above their ass crack, or whoever loses the next drinking game has to get the winner’s design on their ankle. With so many opportunities of shitty artwork to get on your body, there’s really not many reasons not to. So, try it out. You might just love it.