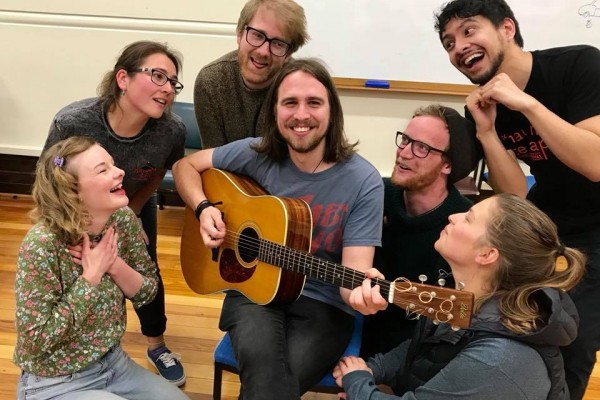 Dunedin improv troupe “Improsaurus” – the professional arm of the Otago University Improvised Theatre Club – has just launched their ‘All-Stars’ season of fortnightly shows. While the closure of Fortune Theatre was a blow, their next show is at Allen Hall, and they are announcing a new location soon. We sat down with troupe member Kate Skinner to get some insight into what the hell improv is.

We do! Some people claim we don’t, but we do. We have a theme for the show , but at the beginning of the show we will ask for some audience inspiration. That inspiration guides the entirety of the show: characters, scenes, dialogue, plot, basically everything.  That is how last season, a prompt of ‘Superbad’ turned into a show about a superhero who smashes cars.

So we have around six performers, and an MC on the night and they will explain to the audience what improv is and practise doing “Ask For” questions. The MC comes up with the format for the show, which is basically a theme that the show is based around. So for example, it could be a game show, or surviving an apocalypse, or a high school romance, which gives us some direction as to what characters to expect and what the climax could be.

That’s where the Ask For comes in. So the MC will say to the audience something like “Name a non-geographical location,” or “Name an unusual object”. That’s what keeps us honest – we can’t possibly prepare for what the audience is going to say. And you can normally tell because, even in a fantastic show, we’ll sometimes make mistakes, like forgetting a character’s name, or walking into a space that was just set as a giant hole, or contradicting what was previously said. For us, that is bad improv, and we work really hard to NOT make those mistakes, but, to be honest, that is sometimes where the joy of the show comes from.

A lot of the time people ask if we practise for the show. We do, but that doesn’t mean we plan scenes, we just practise the skills associated with improv to keep our minds sharp and agile.  For example, the fundamental rule of improv is that you have to say yes to everything. In fact, you have to say “yes, and…” Not accepting an offer is called “blocking”. So like, if your scene partner said “grab that knife” and you said “it’s not a knife, it’s a carrot” it would ruin the flow of the scene – now you are arguing about whether this is a carrot or a knife, as opposed to grabbing the knife and single-handedly killing all the zombies that are attacking your town!

Such a great question! Plot is one of the skills we practice a lot. The platform is usually set in the first scene, where we introduce the characters and “normalcy”. Then they encounter a problem that changes normal life. Then something has to happen to accentuate that or make it worse, then we reach some sort of major climax. The final key is the resolution, probably the hardest part. The plot needs to wrap-up, but you also want the characters to change in some way – it isn’t interesting to watch the characters just go back to their old lives – they just saved the world!

Because you can’t predict what your partner is going to say, you can sometimes find yourself in a strange scene. If we ever end up in a position where we feel we uncomfortable we just end it, no questions asked.

As for screwing up, we are all friends and supportive of each other. Improv is far better when you trust your partner, which includes making your partner look good and being nice if a scene doesn’t go so well. Plus, we are our harshest critics, and the audience usually enjoys even the scenes we hate!

Our current season is ‘All-Star’ themed, it’s all made up of formats that we used in the past that worked really well. On Friday the 18thof May, 10:30pm at Allen Hall, we are doing an Armando, which a variety of monologues and short scenes. After that, we’re doing “Improsaurus: The Musical” a fully improvised musical, songs and all. The shows only cost $10 and are a blast!