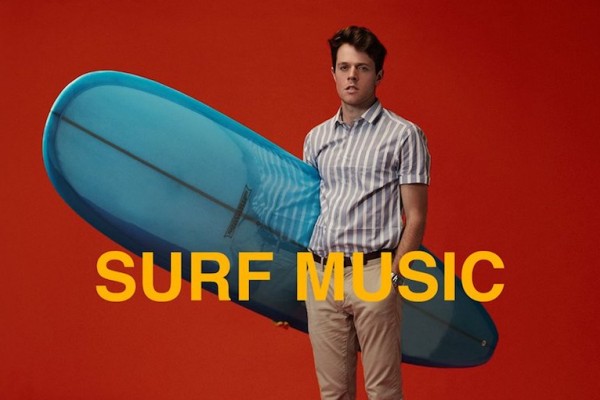 Paul Williams isn’t a household name yet. Maybe he will be soon, but for now all you need to know is that he’s Guy Williams’ younger, better brother.

“Surf Music” is an enigma. It’s funny, but not a comedy album. It’s surprisingly deep and romantic, but also self-referential and sarcastic.

Paul can (and does) do genuine comedy songs – his standup show includes a number about society coming together to address AIDs, poverty, racism, and the lack of waterparks in New Zealand (“and don’t tell me that Splash Planet counts because it doesn’t”).

Paul got his start back at Nelson College as a parody rapper – ripping off Jay-Z with “Nelson State of Mind,” Dr Dre with “Still P.A.U.L.” and Kid Cudi with “Nite ’N Day,” about buying a pie and a blue Powerade at the two four.

Despite quickly becoming the undisputed (well, uncontested) king of the Nelson Rap Game, he has since deleted the songs from YouTube. “There are definitely some I feel embarrassed by now,” said Paul, “but looking back it mostly just reminds me of a really good time in my life.”

Paul never saw “Surf Music” as a joke album, it was just “an attempt to make an album of the best music I could, but I’m just a jokey person, so that’s how it turned out”.

Perhaps unsurprisingly, considering that Paul hosts a basketball podcast, Advanced Analytics, with his brother, the album is chock-full of NBA references.

“I might not be the best, but I promise that I’ll try. I could be your number one, I could be your Anthony Bennett.” The second track references the 2013 number one draft pick, widely considered to be the worst number one pick of all time, averaging 4.4 points per game over four seasons before being dropped from the league altogether.

“I’ve always been fascinated by the draft and who turns out to be good and who doesn’t,” he said. “Anthony Bennett was just someone I felt fit the analogy.”

In contrast to his often-heartfelt music, his standup is far more lighthearted. Like Gambino/Glover, it almost feels like two entirely distinct people.

His hour-long show “Summertime Love” is formatted as a dating seminar on how to find the right partner (full of tips on things to look for, like “good knees” and “not racist”), interspersed with embarrassing childhood stories and opinionated rants about how the term “Red Velvet” being used to describe a cupcake flavour makes no sense – “it’s just a colour and a fabric”.

He earned himself a nomination for the 2017 Billy T Award for up-and-coming kiwi comedians, an honour that now lets Paul bill himself as an “award-losing comedian”.

He said he was “really surprised” to be nominated “but honoured that some people thought it was good”.

His brother Guy, who won the Billy T in 2012, and shared the stage performing his own show “I Want to Hear What I Have to Say” immediately after Paul’s during the Dunedin Fringe Festival, has obviously been overshadowing at times, but Paul said he never felt any real need to escape his brother’s shadow.

“I’ve never really though about it. I think we’re quite separate in what we do. He does more political stuff. He’s more intellectual. I’m kind of just whimsical.”

He’s taking “Summertime Love” to the Melbourne Comedy Festival and the Edinburgh Fringe Festival later in the year. “Surf Music” is on Spotify, and the music video for the lead single (also called “Surf Music”) is out now.