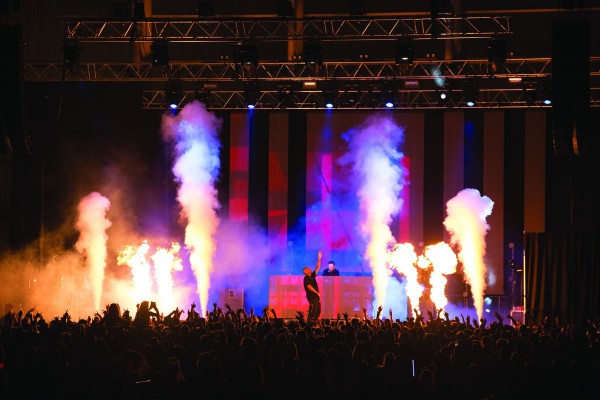 Saul Milton (Chase) and Will Kennard (Status) met at uni in London in the early 2000s. Fifteen years, four full albums, their own record label and multiple headlines later, they find themselves sitting happily as one of the biggest DnB acts in the world.

OUSA managed to snag Chase & Status for O Week 2018, and they put on one of the massive stadium show with all the bass drops and flame throwers your heart could desire.

Chelle Fitzgerald was lucky enough to find herself chilling after Thursday night’s gig with Will and Patrick Williams (MC Rage, a key member of the live act), who were happily up for some Q&A.

The list of artists you guys have produced for, or collaborated with, is like a fantasy football team of music. Was there one artist in particular that you really felt a deep vibe with?

Will: We did a lot of work with Rihanna [producing ‘Rated R’] and I have to say, she’s definitely one of the most awesome people to work with. Awesome fun actually, and professional. Everything you think she is, from her persona online, she actually is like that. I think that’s why she’s the most awesome, isn’t it? Cause everyone knows she’s real - and she is.

She got us to support her at a small London thing she did, she said “Guys I want you guys to come and support me, DJ before I go on.” And it was the biggest nightmare of all time ever, cos it’s like, 7pm, we’re playing to hardcore Rihanna fans, young girls. We’re DJing drum and bass, dubstep, and like, weird shit, and people are just, like, standing there.

MC: Her tour manager and the way they moved around and stuff, it was just, so ‘American’ - it was big and amazing. Just to play before her and be around to experience how she maneuvers stage shows and the way they do everything. It was amazing to see.

We know Dunedin is no Glastonbury, but we’re stoked you came to play here! What is the best gig you've played, and can you think of the worst?

Will: Well, the worst is probably what Patrick [MC Rage] just said - no offense to Rihanna, but that was a pretty bad gig. It’s hard to pick one for the best place. Obviously you just mentioned Glastonbury, for us that was a pivotal moment, headlining the Other Stage.

MC: It’s hard because we headlined Eminem in [Pukkelpop Festival] Belgium, we headlined Metallica in Roskilde Festival in Copenhagen and came out to like, 80,000 people, and Metallica were like, ‘we’re gonna stay and watch to find out why you’ve headlined us’.

It’s hard to pinpoint the best one because there were so many. The year of Glastonbury, where The Rolling Stones were headlining one stage and we was on the other, and friends and family were ringing us, like, ‘oh my god you’re up against The Rolling Stones’ …

And then places like Bulgaria, where we don’t really have a lot of music being played on their radio. But the way that they reacted to us, the energy was next level! I was just stood there looking at Will going, ‘what the fuck?”

Do you have any kiwi artists that you quite like?

MC: Obviously Fat Freddy’s Drop - the ultimate. We ran like hell to the stage to watch them play. And Scribe, y’know, how many dudes you know flow like this?! It’s ingrained in NZ, from the early stuff from reggae to hip-hop. I used to buy the P Money mixtapes with the Pokemon!

Do you party right after your gigs, or do you like to chill?

MC: Yeah like, I just wanna go out to a flat and burn a sofa or something afterwards [laughs]. We read it on the inflight magazine, it said “burn stuff when you get here”. When we landed, they announced it and all!

Clearly you guys have a lot of love for British EDM music, especially from the ‘90s like Prodigy and Portishead, and now you are a massive part of keeping that very unique British sound going. How does it feel to be joining that list of your own influences on that list?

Will: Amazing, yeah, it’s surreal to think of yourself as part of that kind of history, but you know, only other people can say that, cause you’d never describe yourself as that. It is humbling, just to be put in the same kind of sentence as those people you mentioned. But the minute you start thinking like that, it’s hard. We’re just always worried about the next step, and staying relevant. And while we still want to tour and make music, you can’t rest on your laurels, there’s a lot of new kids coming through, there’s a lot of amazing music being made, so how do you fit in still?

How long are you gonna make us wait for your next album?

Will: We’re working on new music and keen to get it out this year, but it might not be the same as our last few albums. We’ve written four albums now, three of them have been on Universal and had this sort of drive into the mainstream, and I think that towards the end of the last album, even though we’re really proud of it, I think there were points where we started to forget kind of why we set out to do what we’re doing. And so this year we decided, it’s been 15 years, so let’s kind of just go back to our roots, like jungle, that’s what we’re working on this year.

The Blind Faith video makes me really nostalgic for a time and place that I was never even part of. Was it your intention to make the entire world jealous that they weren’t British in the ‘90s?

Will: [laughs] You can understand it. You say jealous, but some people looked at that video and saw a kid in a warehouse, in the middle of nowhere, four in the morning, or eight in the morning, off his nut, not everyone gets it. It doesn’t look that glamorous [laughs]. But if you do love what that represented, then you do get it.
MC: [laughs] Even though you wasn’t part of it, you have a connection to it.

Finally, it’s been 15 years since you guys came on the big scene. Have you seen a lot of changes in the industry over this time?

Will: When we started out, the social media thing didn’t exist, and obviously the influence of the internet and stuff has changed music and the industry a lot. There’s not so much of an underground scene anymore. It was way more word-of-mouth - I think the scenes that we came from were way more niche and kind of insular and there was a real feeling that you were part of something. I think it’s harder to create that now. But at the same time, the exposure and the reach of music is amazing. So it’s changed, it’s good, but in a different way.