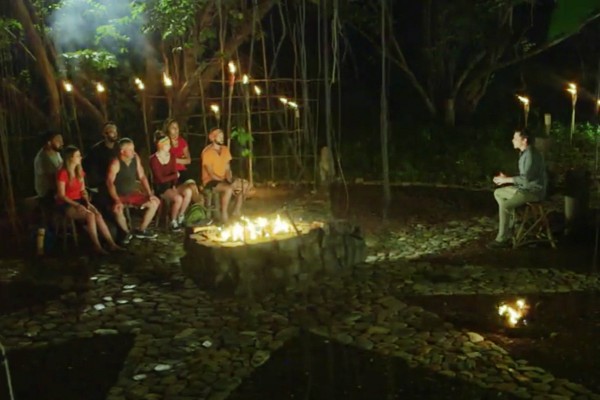 Sam is a Survivor superfan, which means he’d be voted off first if he ever played. This is his weekly blog on Survivor New Zealand strategy.

At some point in Survivor, you need to become a threat if you want to win. If you’re seen as a passenger, then barring an amazing final speech (Sophie Clarke) or an opponent everyone hates (Natalie White and Russell Hantz), you will be slayed for your passive play. But it’s still a terrible idea to declare yourself a threat on day one.

As a Survivor superfan, Dee surely knew this. In the early part of the game, when alliances are quickly cobbled together and snap decisions made, everyone is on the lookout for a safe target. Throwing around random names is a risk—if word gets back to that person and they’re better connected than you assumed, it can rebound badly. And for the purple Hermosa tribe, who’s a safer target than the person who literally outed herself as a potential villain?

Dee makes a common mistake among superfan contestants: playing too enthusiastically, without the social game to back it up. When she tells Georgia and Shannon to use their “sex appeal” to rope in Mike and Lee, she’s effectively telling her would-be allies to go off and form side alliances without her. Of course it backfires: Georgia does make her sexy eyes at Mike, but they both go after Dee instead. Mike handles Dee perfectly, giving her a plausible red herring in the shape of Barb and making it seem like Dee’s idea.

As Shannon remarks, Dee’s gameplay made people paranoid, when the best way to make allies is to put people at ease. Mike can get away with playing the game hard—and being a bit of a douche into the bargain—because he’s naturally charming, quickly forming three separate pacts with Lee, Georgia and Nate. If you don’t have that ability to form an instant rapport with people, you need to keep your head down and built those connections slowly.

In contrast, Hannah—the Mogoton tribe’s target—really did nothing wrong. Early votes in Survivor are notorious for their sexism and ageism: in the absence of someone like Dee who singles themselves out, the default is to vote for the oldest and/or largest woman on the tribe. Normally, though, tribes will at least have a couple of days and an immunity challenge before having to vote, giving people like Hannah a chance to prove themselves and form alliances. But this season the producers sent both tribes to Tribal Council on the very first night—in hindsight, a terrible call. With the players rushed into making a shallow decision based on incomplete information, what were the producers expecting to happen?

At least Mogoton had the good sense to feel shame and regret for their decision when they get back to camp. The regret is compounded when Tony spends the night doggedly shaving their flint down to nothingness, and the next day barking out awesome instructions like “just bloody start it here mate, and bloody yeah” (a verbatim quote), before goofing the immunity challenge and landing them back at Tribal.

Normally, Tony’s lack of game sense (he has to have the concept of an alliance explained to him) and general blockheadedness would see him taken to the end as a useful idiot, a la Keith Nale or Phillip Sheppard. But as Shay realises, Tony’s potential utility in the late game is moot if Mogoton go into the merge outnumbered. Staying competitive in the challenges means getting rid of either Tony or Izzy; keeping Izzy around, and acting as her guardian angel, is a better move for Shay.

Tony’s incessant talk of a “tight four” alliance of himself, Shay, Sala and Lou—followed by his immediate ouster by said alliance—perfectly illustrates that in Survivor, there is no such thing as a “tight four” (or five, or six). The tight four was actually a tight three (Shay, Sala and Lou) with Tony as a pawn, and within the three there’s a further two of Shay and Sala. Alliances always contain sub-alliances, and sub-alliances create cracks.

Avi recognises this, and exploits those cracks. Parlaying his way into a junior position with the “tight four”, he kisses the ring and accepts Lou’s meagre offer to be dragged to the end as a goat (“we will carry you right the way through”—not exactly the greatest pitch). Once Avi’s in, though, he’s able to gain a better sense of the game’s dynamics and immediately turns on Tony, protecting his own close ally Tom in the process. In doing so he supplants Tony’s position at the bottom of the alliance, but he’s a much more dangerous proposition than the salty old codger. As Tom’s only ally in the game, Avi (like Shay and her asset Izzy) effectively commands two votes—a powerful advantage, if he uses it correctly.

Oh, and Redemption Island will be a thing this season. Ugh.

In the tradition of Stephen Fishbach’s “Fishy” award, in each post I’ll be naming the player of the week. The Cheezel this week goes to Shay. On the face of it, she screwed up badly, voting off two of her own allies in as many episodes. But she remains Mogoton’s unrecognised puppetmaster, with multiple tight alliances, a stronger reading of the game than her partner Sala, and a demonstrated ruthless streak.