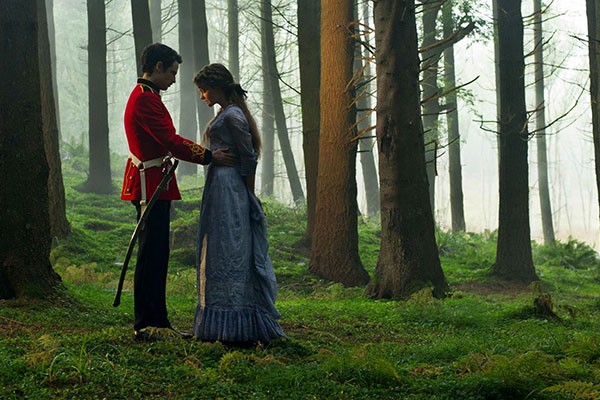 Far from the Madding Crowd

The success of Nicolas Winding Refn’s operatic kick in the teeth with Bronson and Tomas Alfredson’s hushed, emotionally muzzled Tinker, Tailor, Soldier, Spy has given audiences high expectations when it comes to Scandinavian directors and the films they are tied to. Unfortunately, Thomas Vinterberg’s adaptation of Thomas Hardy’s novel, Far from the Madding Crowd is miles away from the work of both Refn and Alfredson. Instead, the audience is given a film that is inert.

Bathsheba Everdene (Carey Mulligan) independently runs a farm in Dorset, which brings her to the attention of the locals. Her intelligence and determination attract the interest of three men: a sheep farmer called Gabriel Oak (Matthias Schoenaerts), Sergeant Frank Troy (Tom Sturridge) and a prosperous bachelor named William Boldwood (Michael Sheen). As Bathsheba tries to maintain her position in the local community and on the farm itself, she also attempts to mediate the attentions of the three men as they vie for her hand in marriage.

Based on an 1874 novel about class and gender struggles in the Victorian countryside, the film adaptation doesn’t stray from the original plot, but while these elements should give it intrigue or exotic sensibilities, Vinterberg’s version simply creates something fatally familiar and thus quite dull. The director’s instincts appear to fit perfectly with the well-worn traits of Victorian drama, where desires are hinted and manners are observed, but it’s a vision that lacks originality and emotion. Tears forever teeter on the brink of repressed British faces in this disappointing bodice-ripper, and that becomes a real problem as Far from the Madding Crowd becomes a film that audiences have seen before.

Ultimately, the performances carry Vinterberg’s film; Michael Sheen and Tom Sturridge portray two emotionally damaged alpha males exceptionally well, and Carey Mulligan also proves that she can easily carry this film. However, the film’s relentlessly repetitive structure does not give her enough room to fully flourish.

With uninspired cinematography, unexplored character development and a generic musical score full of meaningful strings and lilting piano solos, Far from the Madding Crowd amounts to an unsurprising and disappointing two hours.