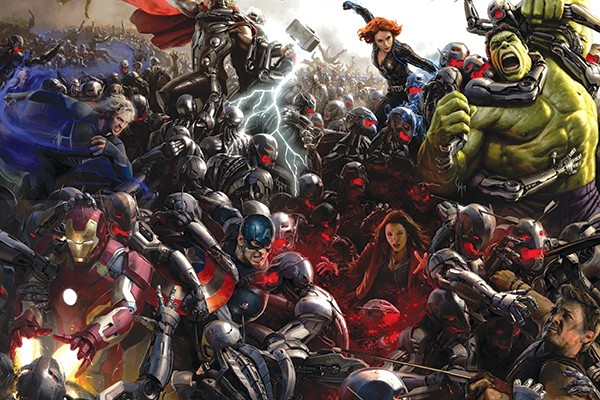 The Marvel Cinematic Universe’s latest instalment, Avengers: Age of Ultron, brings us back to the team, but now they’re working together and combining their powers to form a more cohesive and effective team that makes for one hell of an entertaining, fun and clever film.

With the superheroes functioning as an unshakeable collective, the team raids a Hydra outpost where the terrorist organisation has been conducting ethically questionable experiments on humans with Loki’s scepter. Two humans whom Hydra were experimenting on are twins and new characters to the series, Scarlet Witch/Wanda Maximoff (Elizabeth Olsen) and Quicksilver/Pietro Maximoff (Aaron Taylor-Johnson). From the offset, they appear to be the main antagonists, but this transitions over time.

A concept introduced by Tony Stark/Iron Man (Robert Downey Jr.) in the first film becomes the main villain in Avengers: Age of Ultron — an artificial intelligence program called “Ultron”. In an effort to protect the earth from alien attacks and ensure world peace, Stark and Bruce Banner/The Hulk (Mark Ruffalo) find and use artificial intelligence (AI) from the gem of Loki’s scepter to complete Stark’s program. However, Ultron turns out to be an insane and murderous AI, who intends to help the planet but not in the way Stark had planned. With Stark and Banner having kept the project a secret from the rest of the group, tension builds among the members as they attempt to fight an immortal, crazy, powerful AI let loose on the planet.

Avengers: Age of Ultron is very much a sequel, so be warned. This instalment will go over your head without the context from the first film and the other Marvel films. Then again, it could just seem like your typical action film. Action films often fall into the tropes of having no character development and serious dialogue, but director and writer, Joss Whedon, supersedes these potholes by allowing the superheroes interesting character development and frequently offering jokes and jabs right the way through.