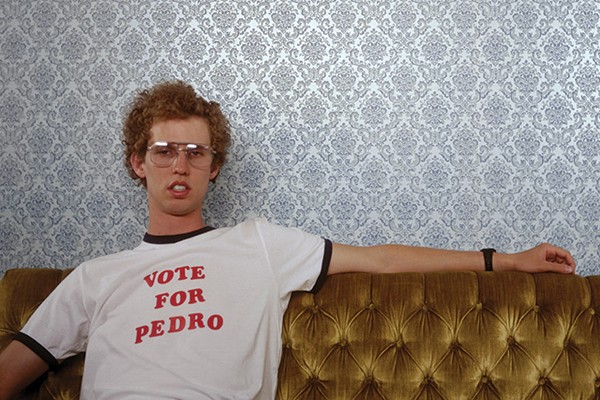 It’s impossible to have a lukewarm reaction to Napoleon Dynamite. The film divides people — you either adore its low-key absurdity or find it totally pointless. In fact, the movie is so polarising, it broke Netflix’s algorithm. The website couldn’t accurately recommend the movie to viewers and they offered $1 million to whoever could fix their software. Napoleon Dynamite was an unexpected cult hit, so something about this low-budget, arthouse film obviously struck a chord.

Napoleon Dynamite (Jon Heder) is just a dude living his uninteresting life in a tiny desert town. His classmates are insufferable and his family is bonkers. Our hero is constantly having to deal with his brother Kip (Aaron Ruell) and Uncle Rico’s (Jon Gries) misadventures in cage-fighting, time travel and selling crapperware. One day, Napoleon befriends new student, Pedro (Efren Ramirez), and together with the quiet Deb (Tina Majorino), they put on an underdog campaign for Pedro in an effort to help him win class president.

Nothing concrete ever really happens in the film and it often feels directionless. However, there is something comforting about a film with no clearly articulated purpose. The characters hopelessly try to fulfil their personal quests for love, the glory days and friendship. It feels very real to see normal human desires being played out against a backdrop of pointlessness.

The success of Napoleon Dynamite hinges on a script full of ridiculous one-liners such as “It took me, like, three hours to finish the shading on your upper lip” and a circus of unexpected characters and situations. The film ultimately offers one clear message: friendship gives us a sense of purpose. Pedro promises everybody’s wildest dreams will come true if they vote for him and, at the end of the film, Napoleon’s wildest dream — of having a friend to play swing-ball with — is realised.

Napoleon Dynamite is kind of a cruddy high-school film, but I think it has more substance than stereotype. Jared Hess combines the mundane with the eccentric to concoct a strange movie that will warm your heart with its sparky brand of blandness.