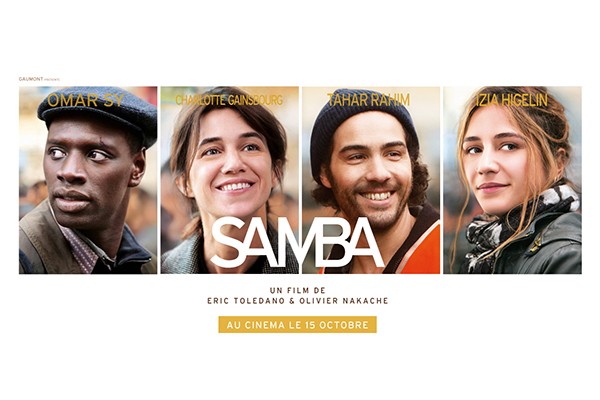 People often say the best filmmaking is the sort you don’t notice, where you can just get involved with the characters and story; while that’s not necessarily true, in Samba this philosophy works beautifully. The film’s opening sequence shows the buzz of a tacky, overblown wedding before going down the metaphorical social ladder to the kitchens, where Samba Cissé is seen cleaning plates with his bare hands. With the cards on the table, the audience settles into the film’s earnest and touching storyline.

Loosely based on Delphine Coulin’s novel, Samba pour la France, the film follows the life of unauthorised Senegalese immigrant, Samba Cissé (Omar Sy). Having evaded the authorities for ten years, Samba tries to keep out of trouble as he navigates the loopholes of remaining employed at a Paris restaurant while he waits to apply for residency in France. Samba finds himself falling for his case worker, Alice (Charlotte Gainsbourg). As her affections for Samba begin to grow, Alice is warned by her co-worker, Manu (Izïa Higelin), to detach herself from Samba’s case — she doesn’t listen and the pair share a tender kiss.

To draw us in, Nakache and Toledano use conventional narrative tropes and a romantic subplot, but what the pair really show us is a reality where workers are exploited and how institutionalised racism works to create barriers for immigrants. While Nakache and Toledano’s approach could be seen as a somewhat manipulative means to pull on the audience’s heartstrings, the pair have utmost confidence is in their cast — a confidence that is certainly warranted. Omar Sy is a star and wins our hearts in mere seconds of screen time but also gives light and shade to his character without losing us. Charlotte Gainsbourg is radiant and gives a fine, comic touch to the damaged Alice. The raw performance of both Sy and Gainsbourg conveys the film’s message of progression and understanding in a way that is genuinely heart-warming and honest.

I was won over by the sheer personality of this film; Samba is no doubt an early contender for Top 10 films of 2015.