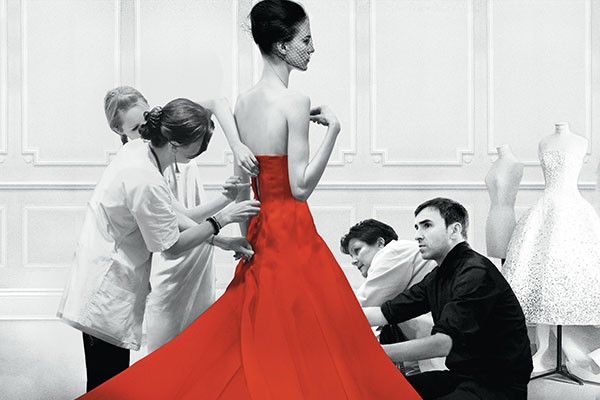 When it comes to documentaries, I’m not a huge fan. It is no surprise then that I went into the cinema with considerably low expectations and the unnerving feeling that I was about to fail miserably at another test for ma classe française.

Dior and I follows the eight-week escapade of the Christian Dior fashion house team as it prepares for the launch of a new haute couture collection led by the keen, newly appointed artistic director, Raf Simons. Narrated by Christian Dior himself, the documentary tracks Simons and his team of devoted collaborators as they mix the old with the new, and bring Simons’ creative, first-ever collection to life.

After falling in love with the art of Sterling Ruby, Simons insists that it must be printed onto unique materials and used for his collection, which leaves his team with various technical issues to deal with. After many late nights and only a few tears, Simons’ collaborative team proves its worth time and time again, as they face these problems head on and achieve what us mere mortals would surely fail to even resolve. The haute couture collection that lands in Paris Fashion Week is ultimately a success, with Raf Simons creating an incredibly Dior-esque line of clothing that even Christian Dior himself would have been proud of.

Initially, the film filled me with dreams of becoming a designer akin to those in the Christian Dior fashion house. However, I was dissuaded from that idea very quickly, as I began to see that anything in fashion that can go wrong will go wrong, unless it goes right — but usually it goes wrong first. Who knew that slightly delayed flights and malfunctioning elevators could have such an impact on the fashion industry and its deadlines?

Even with my desperately deplorable lack of fashion sense, I could easily appreciate the beauty and time taken to create the haute couture collection. Dior and I left me childishly coveting the exquisite clothes produced by Simons and his team. If only I had a spare few hundred thousand Euros … if only.