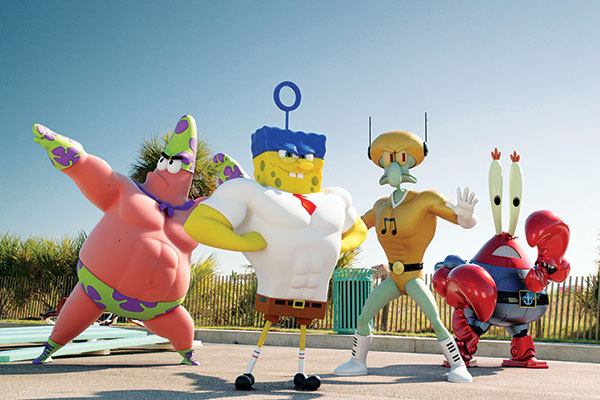 The SpongeBob Movie: Sponge out of Water

Filled with terrible puns, The SpongeBob Movie: Sponge out of Water is a complete disaster that falls incredibly short of the beloved children’s cartoon that we all cherish and adore. Furthermore, with strange live-action and animation effects, I had to wonder if the director was high throughout the entire production of the film.
A pirate called Burger-Beard (Antonio Banderas) makes it his mission to find the last page of a magical storybook in which he can rewrite the fate of Bikini Bottom — SpongeBob Squarepants’ (Tom Kenny) hometown. Not only does Burger-Beard succeed in wreaking havoc on the townspeople of Bikini Bottom, he also steals the Krabby Patty Secret Formula, intending to make the best burgers in town from his food-truck/ship. Leaving Bikini Bottom without Krabby Patties turns the townsfolk into a bunch of crazed butchers who blame Plankton (Mr. Lawrence) and SpongeBob for the disappearance of their beloved burgers.

Being hated by everyone really shines a new light on SpongeBob’s relationship with Plankton. Together, they concoct a plan to save their town from devastation. With the aid of Patrick Star (Bill Fagerbakke), Squidward Tentacles (Rodger Bumpass), Sandy Cheeks (Carolyn Lawrence) and Mr. Krabs (Clancy Brown), SpongeBob makes his debut into our dimension and ultimately restores Bikini Bottom to its former glory — one full of Krabby Patties.

Without Antonio Banderas I would have fallen asleep within ten minutes of the film starting. But even with him, it was still a serious struggle to keep my eyes open. Also, if they wanted to make Burger-Beard a child-friendly version of Captain Jack Sparrow, they should have just cast Johnny Depp. Banderas, I am utterly disappointed. You can do so much better.
This article first appeared in Issue 7, 2015.
Posted 2:51pm Sunday 12th April 2015 by Maya Dodd.