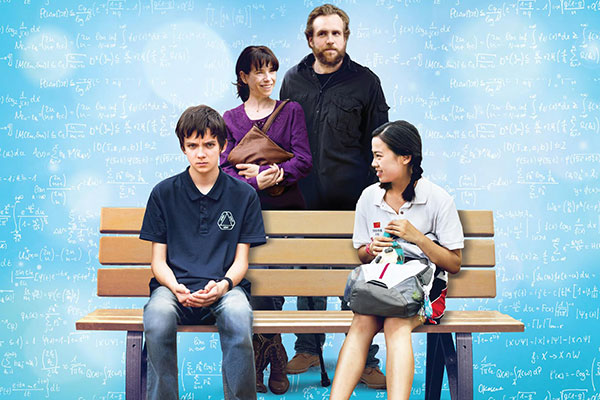 X+Y is a smart drama that rides the fine line between movie and TV-drama-of-the-week by juxtaposing the life-changing events thrust upon the film’s young autistic protagonist and maths genius, Nathan Ellis (Asa Butterfield), with the everyday hassles of his condition for those around him. The audience follows Nathan on his journey to Taiwan, as he is selected to compete in the International Mathematical Olympiad Preliminary Section Contest. Being away from home, Nathan is forced to deal with a new environment, new people and a feeling he doesn’t quite understand: love.

Across the board, the performances are top notch. Rafe Spall gives a very likeable, unsentimental characterisation as Nathan’s multiple-sclerosis-suffering tutor, Mr Humphreys. Eddie Marsan as competition leader, Richard, shows us the subtle twattery that can turn smart, misunderstood kids into disagreeable adults. Jo Yang as Zhang Mei, Nathan’s maths partner, displays great maturity and control in the ebb and flow of some quite complex emotional scenes and brings the audience along in trying to understand Nathan. The film’s star, Asa Butterfield, carries it all beautifully. He’s a quiet, coiled spring, ready to jump clear of any possible contact or public interaction. He tells us so much through awkward body language but never falls into affectation.

However, there are some odd flaws. The film overuses its score, which seems to tell us at every turn how emotional and important everything is. With the director and actors having done so much of that legwork with the story, the ambience the music brings ends up feeling redundant.

Combining a director who has a perceptive sensitivity towards the everyday reality of behavioural disorders with the authentic performances from the cast, X+Y is a film that has its heart firmly in the right place.
This article first appeared in Issue 6, 2015.
Posted 3:11pm Sunday 29th March 2015 by Simon Kingsley-Holmes.