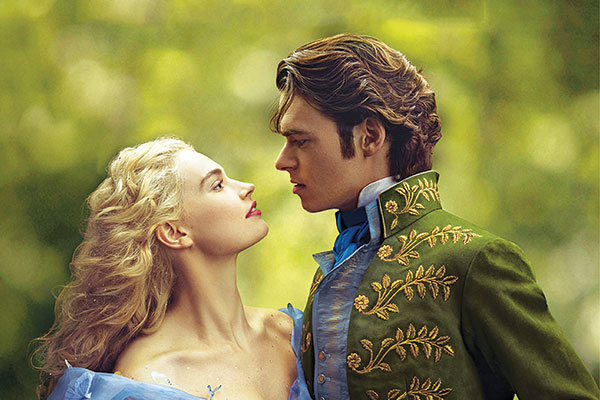 With a $95 million dollar budget and an iconic fairytale storyline, you’d assume that the directors would spice up Cinderella just a little bit. However, if you were looking for a dramatic plot twist or anything remotely original, you won’t find it here.

Ella (Lily James) lives happily with her parents until her mother (Hayley Atwell) becomes sick and dies, but not before telling her to “have courage and be kind.” This is a resounding theme throughout the film and one that Ella definitely needs after her father (Ben Chaplin) marries Lady Tremaine (Cate Blanchett) and later dies after travelling overseas for business. Treated poorly by her stepmother and stepsisters, Ella is forced to move into the attic and soon gets her new nickname, Cinderella, when she falls asleep in front of the fireplace and wakes up with soot on her face. With a fairy godmother (Helena Bonham Carter) at hand, Ella’s luck changes when she gets to go to the Royal Ball, falls in love with Prince “Kit” Charming (Richard Madden) and leaves behind her glass slipper. Cue the happy ending when Kit and Ella are eventually reunited and she gets to wear the shoe again!

Although Disney missed the opportunity to make a convincing and realistic heroine in Cinderella, Cate Blanchett steals the show as the evil stepmother. She sweeps onto the screen in her green gown, establishing herself as a lady who knows no kindness. Her character is well developed and perhaps the most legitimate of Disney’s villains. The convincing justification for her spite towards Cinderella shows that all characters are in search of their “happy ending.”

The film’s cinematography is breathtakingly creative and, if anything, the music saves the film by making it flow seamlessly, fixing what the script fails to do.

Cinderella is nothing special, but if you want to see a lighthearted and aesthetically appealing film that guarantees you a happily ever after, this is the one to watch.
This article first appeared in Issue 6, 2015.
Posted 3:11pm Sunday 29th March 2015 by Rachael Hodge.