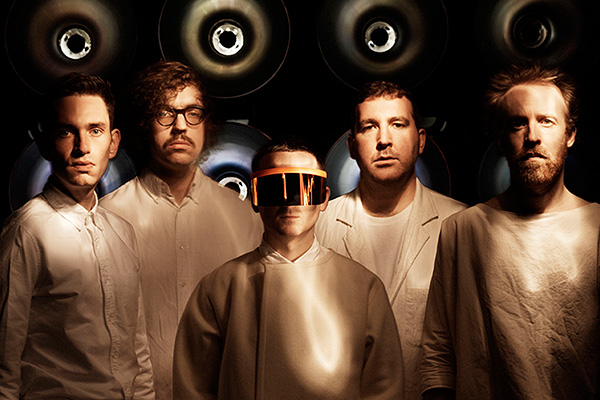 London group, Hot Chip, has been carefully honing its brand of electronica for a decade and a half now. On fifth album, In Our Heads, they have seemingly perfected their craft, blending irresistibly catchy electronics with thought-provoking lyricism. New track, “Huarache Lights”, however, suggests the best may be yet to come. The first single off their upcoming sixth LP, Why Make Sense?, “Huarache Lights” suggests even further musical maturation for the group. The song is a simmering mid-tempo number, with pulsing synthesizers and psychedelic vocals. The way Alexis Taylor calls “just bathe in the light” suggests both David Byrne of Talking Heads and a New Age hippie with an unhealthy obsession with lava lamps. More confident and blissed-out than we’ve ever heard them, Hot Chip are on top form with “Huarache Lights”.

Just in case you missed the fantastic news, Faith No More are about to release their first album in eighteen years. “Superhero” is the second single off the long-awaited Sol Invictus, following “Motherfucker” late last year. Whereas “Motherfucker” was new and alien, “Superhero” is pure fan service. It starts off sounding like a cut from 1989’s The Real Thing, before locking into an aggressive groove more reminiscent of their mid-nineties work. The precarious chorus is the song’s best asset, due in no small measure to Roddy Bottum’s haunting keyboards.

If I have any complaints with the song, it is the mixing. There is something claustrophobic about “Superhero” soundwise, especially when compared to the cavernous “Motherfucker”. The instruments don’t quite have enough room to breathe. Hopefully this was just due to poor YouTube sound quality, and won’t be the case on the album. Regardless, “Superhero” is a fantastic tune. If you are hungry for new Faith No More, this will no doubt tide you over until Sol Invictus comes out in May.

I t was anybody’s guess where Kanye West wanted to go after 2013’s caustic, industrial-tinged Yeezus. A recent collaboration with Rihanna and Paul McCartney called “FourFive Seconds” turned out to be rather sweet in nature, featuring acoustic guitar, summery vocals and not much else. Worryingly, our next glimpse of Kanye’s future was “Only One” — yet another stripped-back, sugary tune featuring Paul McCartney. Some people will feel differently, but to me that track is one of the least developed songs Yeezy has ever put to tape. On Yeezus, Kanye’s raw production and autotune gave the songs an added corrosiveness. On “Only One”, they actually work to the song’s detriment, exposing just how ugly and half-baked it is.

But if you had fears that Kanye would fail to deliver on upcoming LP So Help Me God, “All Day” should quash them. This new song may feature Paul McCartney once again, but it is a genre-hopping monster nonetheless. Aesthetically, it takes cues from both the lushness of My Beautiful Dark Twisted Fantasy and the dissonance of Yeezus. Kanye raps as hard and as fast as he ever has, his words complemented by the stuttering beat. Kanye’s lyrics might not have the same punch here that they did on, say, “New Slaves” or “Gorgeous”. And, yeah, the autotuned vocal refrain is pretty reminiscent of “Monster”. But it is nice to hear Yeezy spitting bile again all the same.

J ack Ü is a collaborative project between EDM gargantuas Diplo and Skrillex. After that weak, rushed-sounding song they did with Kiesza (“Take Ü There”), I didn’t have high expectations for the project. Surely a Jack Ü song featuring Justin Bieber on vocals would be a contender for the worst song of 2015. Actually, “Where Are Ü Now” isn’t that bad. Firstly, the track is much more tender than you might expect. The focus here isn’t on facemelting bass but on Bieb’s impressively melancholy vocals. The way Jack Ü chops up his words into glitchy hooks shows creativity. And when the bass finally drops, “Where Are Ü Now” is less brostep than it is a strange brand of post-dubstep. Congratulations, Jack Ü and Justin. Your song together wasn’t awful.
This article first appeared in Issue 4, 2015.
Posted 2:32pm Sunday 15th March 2015 by Basti Menkes.