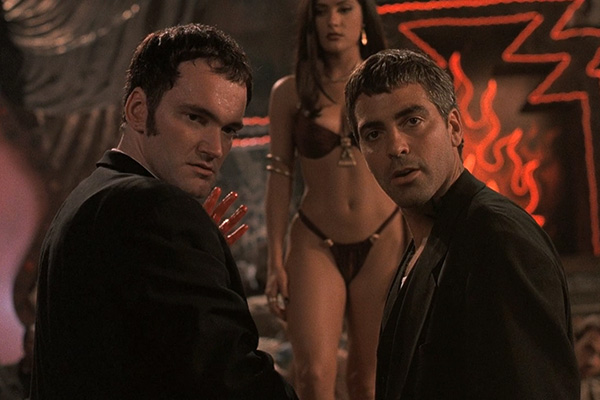 From Dusk Till Dawn

F rom Dusk Till Dawn is a two-course action-crime buffet with references as juicy as a Kahuna Burger; the first course comes in the form of a hostage film and the second, a Vampire film that is far gorier than what we were accustomed to in 1996, let alone 2015.

The film revolves around the religious Fuller family being taken hostage by the Gecko brothers, two criminals played by George Clooney and the film’s screenwriter, Quentin Tarantino. The brothers take the Fuller’s and their RV to get them over the Mexican Border to El Rey, a crime paradise. Safely over the border in Mexico, the group stop at a bar called “The Titty Twister” to meet a crime boss, a mistake that ultimately brings up the film’s body count.

With the introduction of Salma Hayek’s character, Santánico Pandemonium, the film changes direction from Hostage situation to trapped with a growing number of vampires situation. Hayek’s character is the tipping point of the film’s genre transition – and it works. Without giving too much away, the last part of the movie is a kind of no-holds-barred shut-up-and-kill-things gore-fest that our generation are purportedly thirsty for.

What differentiates From Dusk till Dawn from its counterparts is that it isn’t trying to be realistic. The film is messing with you and sweet baby Jesus, is it cool. Though what would you expect from a film with a character named Sex Machine? It’s almost shameless how From Dusk Till Dawn has just about made a checklist of spectacles, from your standard explosions to a guy with a crotch gun.

If you missed them all over the references and the soundtrack, Rodriguez and Tarantino’s fingerprints are visible in the gratuitous blood that spurts all over this film. With Rodriguez directing and Tarantino as actor and screenplay writer, this film has a more gritty B-movie feel than the more popular Tarantino-brand movies.

You have to hand it to them; When Rodriguez and Tarantino set out to make a b-movie spectacle, they damn well deliver.
This article first appeared in Issue 2, 2015.
Posted 6:26pm Sunday 1st March 2015 by Alex Blackwood.