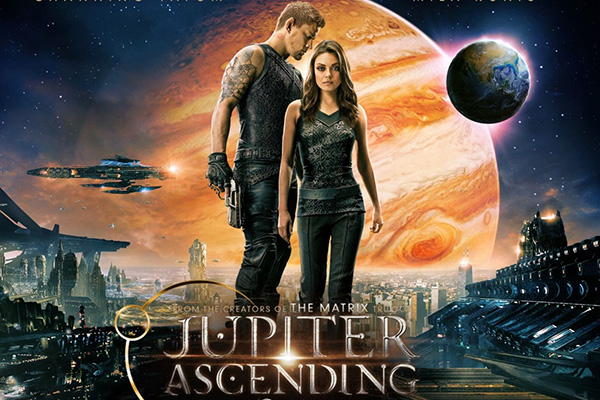 Jupiter Ascending follows Jupiter Jones, a young girl who hates her life, which is spent cleaning houses and bathrooms with her scary Russian family just to get by. She is convinced by her ridiculous cousin to sell her eggs to a clinic in order to get money so that she can buy a telescope just like her daddy, who died tragically at the beginning of the film. But, wait! The doctors are actually aliens in disguise who are trying to kill her!

Cue sexy lycan boy, Caine Wise (Channing Tatum), bursting in on flying boots to save her. It turns out that Jupiter is a “somebody” who the aliens want dead. Gasp! “But she’s a nobody! She cleans toilets!” you say? No — she’s actually royalty, because the bees told us so.

Really, this is what happens in this movie. Obviously, bees are honest and they know royalty when they see it and Jupiter Jones is most definitely “Her Majesty”. That’s why aliens are trying to kill her, because the royal space family is messed up, with weird Oedipal issues.

This clusterfuck of a movie is one of the most hilarious things I have seen in the last year. The reason for this movie being so good, but bad, is the script and how much it attempts to shove into two hours. The actors are fine; they’re not bad actors and you can really see Mila Kunis doing her absolute best to play her role convincingly — but no one can work with a script like this.

My favourite part of the movie is Eddie Redmayne. His potentially unintentional Voldemort impression is fantastic, and his random high-pitched screaming is not so much unsettling as it is giggle inducing. I think he saw how fantastically he did in The Theory of Everything and decided he couldn’t top that performance so he didn’t even try.
This article first appeared in Issue 2, 2015.
Posted 6:26pm Sunday 1st March 2015 by Anonymous Bird.