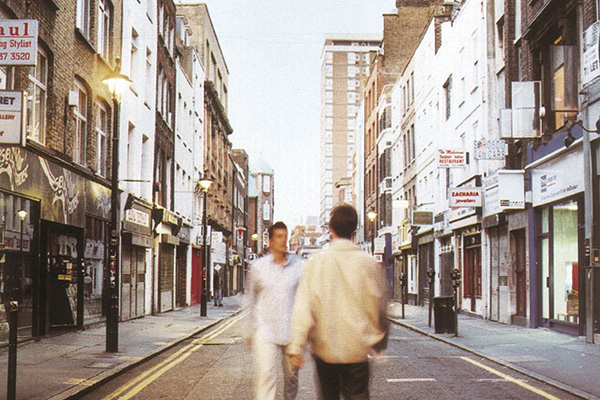 It’s been twenty years since Oasis’s blockbuster second album, (What’s the Story) Morning Glory?, was released. A lot has happened in that time. The band themselves lost their critical and commercial success and their place in the zeitgeist, and fell into an oh-are-they-still-going slump. They eventually broke up in 2009, having never gotten their groove back. Guitarist and principal songwriter Noel Gallagher left his days of ripping off The Beatles behind him, for a wildly creative solo career in which he rips off The Kinks instead. The other band members tried to continue Oasis without him, under the uninspired name Beady Eye, and gave up on that after a while too. It seems there just isn’t a place in the world for blokeish, no-frills rock ’n’ roll anymore.

It didn’t take long. By 1997, other British rock bands were releasing far more imaginative, introspective albums than Oasis could offer: Oasis’s excessive third album, Be Here Now, failed the same year that Radiohead’s OK Computer and Blur’s self-titled record were showered with praise. By the turn of the millennium, unsophisticated rock music was well and truly out of fashion. Even the most mainstream of rock acts had something else going for them, improving on Oasis’s meat-and-potatoes formula. Muse had their science-fiction imagery. Bands like The Strokes and Arctic Monkeys opted for slickness over big riffs.

The culture of hedonism and excess shifted away from stadium-filling rock bands and clung once more to dance music. People stopped looking to lads with guitars for their mindless musical escapism, and turned once more to the bass-generous DJs of the world.

It is a strange experience listening to (What’s the Story) Morning Glory? in 2015. It’s difficult to say it has any creative merit that makes it worth revisiting. Heck, half the ideas you hear were lifted verbatim from somewhere else. The last minute of rollicking opener “Hello” is laughably similar to Gary Glitter’s “Hello, Hello, I’m Back Again”. The piano riff from “Don’t Look Back in Anger” is just John Lennon’s “Imagine” played faster. And the sighing little outro of “She’s Electric” — “With a Little Help from My Friends”, anybody?

Lyrically, Morning Glory isn’t exactly a treasure trove either. Head-scratching highlights include “the sink is full of fishes ’cos she’s got dirty dishes on the brain” and the infamous “slowly walking down the hall, faster than a cannonball” line from “Champagne Supernova”. Noel did absurdist lyrics wonderfully on Oasis’s debut, yet on Morning Glory they mostly fall flat. I won’t even mention his attempts at love poetry.

So why revisit this album?

For one, Morning Glory is a fascinating wee cultural capsule. To listen to it is to step back into another time, a simpler time. Rock ’n’ roll was still alive, and very much a British institution. Furthermore, the album’s just had a remaster and sounds miles better now than it did in 1995. And as energetic guitar pop, Morning Glory has actually stood the test of time. Liam’s voice remains as fiery as ever, and Noel’s ability to come up with (or steal) earworm melodies is still remarkable. Skip “Wonderwall” if you must, but give the blissed-out “Champagne Supernova” or the caustic title track a go. They just might scratch an itch you didn’t know you had.
This article first appeared in Issue 2, 2015.
Posted 6:26pm Sunday 1st March 2015 by Basti Menkes.