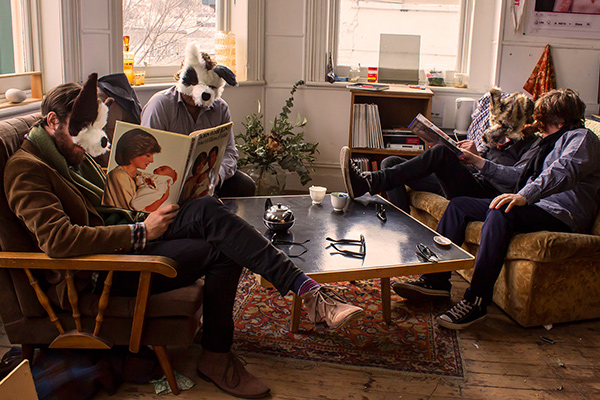 Ha the Unclear - Bacterium, look at your motor go

After releasing a handful of lo-fi pop albums, EPs and singles under the moniker Brown, no one suspected that the Dunedin/Auckland quartet was gearing up for a drastic makeover. In December last year the group released “Apostate,” the first single from Bacterium, Look At Your Motor Go. The song had surfaced before on an earlier release, however this new version featured a tremendous uptick in production. With the savvy team of Oli Wilson and Mike Holland at the helm, the result had a more polished, ambitious sound.

This was a band that boasted a loyal fan following, a lot of whom seemed to revel in their fuzzy, bedroom aesthetic. The transformation was a gamble, and to further cement the change, the group resurrected themselves as Ha The Unclear (a name taken from a childhood pet of Michael and Paul Cathro). In a music scene that's inclined to put artists in boxes, it's important to take risks, either that or remain in your safe, stagnant bubble for the rest of your music making life. Ha The Unclear attempted to break out of that by stepping out of the bedroom to see what a bigger recording setup had to offer. This is not a whole new band, just a whole new dynamic and a whole new approach in terms of production.

Michael Cathro's songwriting is still as strong as his great New Zealand accent. His best asset as a songwriter has always been his unique choice of subject matter and his delivery. Bacterium, Look At Your Motor Go has more than a few songs that fit that bill.

Perhaps the most interesting of the bunch is “Secret Lives Of Furniture.” The narrative of this track is told from the perspective of a coffee table, who also happens to be in love with its owner, “I'm mute, I'm Rimu, I'm loyal.” It's an interesting take on the “love song,” and features a great, pulsing rhythm.

“Growing Mould” finds the band at their catchiest, sounding like a mixture of The Ronettes and Jarvis Cocker. The backing vocals throughout the record are crisp and clear, and are definitely a highlight. Whether it's the interplay with the guitars, or the extremely talented rhythm section, the songs all have a great, subtle groove. That’s quite a unique quality to possess if you're an alternative pop band. One thing the clearer production really does well is bring this to the forefront. The drums sound rich and warm, and the bass has just the right amount of boom and crunch.

At just under 40 minutes in duration, the album flows relatively well. There is a good mixture of slower, more stripped down numbers (“85,” “Infatuated”), singles (“Growing Mould,” “Apostate”) and album tracks (“Kosmonavt,” “Mannequins”). A nice touch is finishing with “Morality (A Million Years Ago),” a track that builds up into something quite beautiful.

Overall, there are times I miss the familiarity of their more lo-fi recordings, but Ha The Unclear should be very proud of this album and what they've accomplished. The bigger sound should introduce them to a bigger audience; something that they truly deserve. There are no real bad songs, just songs that stand out more than others.

Ha the Unclear Are playing at The robbie burns on Friday 17 October as part of their Album Release tour. Support acts to be announced.
This article first appeared in Issue 25, 2014.
Posted 2:58pm Sunday 28th September 2014 by Adrian Ng.