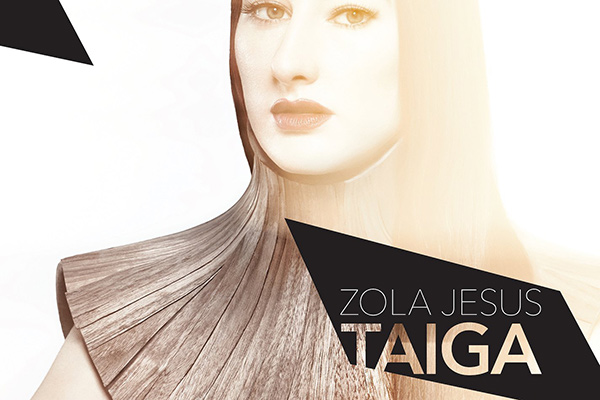 For me, it's always an interesting little storyline when a mainstream pop artist decides to make a more adventurous, more authentic, record. When they feel that urge to break out of their contrived pop shell and validate themselves as true artists and not just a product of the institution. But what I find even more intriguing is when the opposite occurs. When a more experimental artist decides to really go for it and try their hand at making a more commercially orientated record.

Whether or not I'm a sadist is another question all together, but I do love to see if a person or group is able to succeed with this difficult venture; or if, you know, they just flat out embarrass themselves. So about a week or two ago, when I heard the lead single from Zola Jesus's new record, Taiga, my first thought was, “alright, here we go.”

The track in question featured a no-nonsense EDM dance beat, clean, lush production and rich, majestic vocals. It had a catchy chorus and an overall upbeat sensibility. It sounded kind of like Rihanna. Please don't get me wrong, in no way does that have to be a bad thing. I like Rihanna's music, especially when it's well produced and it's infectious, because that's the aim, right? Zola Jesus's “Dangerous Days” is, in fact, a pretty great impression of a good, commercial pop song. I mean, in terms of how the song sounds, it is a commercial pop song. It kind of just lacks the major label and the millions of dollars that would otherwise be spent on advertising it.

Nika Roza Danilova (Zola Jesus) is better known for crafting beautifully textured, slightly gothic records, such as 2011's Conatus or last year's Versions. Ethereal and otherworldly are words that immediately spring to mind. Taiga does not lose that completely. The overall production has taken a step towards the more polished side but artists such as Kate Bush and The Cure have played this game in the past and they were able to form great, balanced albums which contained both artistic and commercial merit. Zola Jesus succeeds to a degree with Taiga, but fails to really hit the peaks necessary to make it a truly stand-out release.

It's not that the songs are bad, but the album just isn't interesting enough when digested in its entirety. Her music suffers a little from the cleaner production, which takes out a lot of the grit and flavour to her otherwise quite guttural soundscapes. Zola Jesus does present us with a few interesting sounds, a key example being “Go (Blank Sea),” in which the whole track seems to be walking on a path of broken glass. Apart from that, though, it's all very much of the same: bombastic percussion; lush synths; pop ballad vocals; and an atmospheric effect every now and then. These tracks don't exactly drag the album down but they don't exactly push the album any further either. There are tracks such as “Ego,” “Hollow” and “Lawless” where it all comes together really well, but then there are tracks like “Long Way Down” and “Nail” where it falls a little short.

It would be interesting to see what would have happened if Zola Jesus had some sort of major label backing, only because some of these tracks could perhaps thrive in today's Top 40. “Hunger” and “It's Not Over” come to mind immediately, but I'm guessing she's better for it. Her talent as a songwriter is undeniable; this record is evident of that. Taiga is a somewhat successful foray into a more produced brand of pop music, whilst retaining some of the qualities that made her great in the first place. But it is an excursion that I hope evolves into something a little more interesting, and into something which more successfully showcases her edginess, eccentricities and abilities as a talented, fearless and creative artist.
This article first appeared in Issue 24, 2014.
Posted 3:00pm Sunday 21st September 2014 by Adrian Ng.