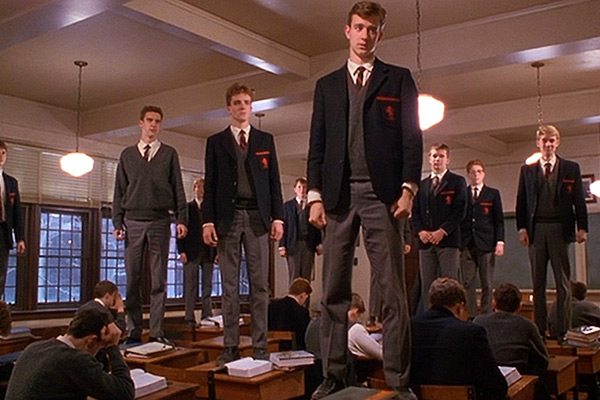 The film that earned Robin Williams his second Oscar nomination and showed the world that he was actually a pretty damn good dramatic actor as well as a talented comedian. Williams plays John Keating, an eccentric and inspirational English teacher at an elite boys prep school in the 50s, whose quirky teaching methods were based on those of real-life teacher Samuel Pickering. The real Pickering was valued by the schools he taught at but, of course, in the movie version the character clashes with his stuffy superiors who will have none of that balderdash and tomfoolery in their institution. When I watched Dead Poets with some friends last week somebody said, “So this is basically Patch Adams in a school instead of a hospital?” That hadn’t occurred to me before but, yeah, it kind of is. But it’s much better than Patch Adams, I promise.

The movie really captures the oppressive and stifling nature of 1950s boarding schools, complete with the impersonal lesson delivery and the corporal punishment. We see how Keating would be a ray of light in that environment; he treats his students as fellow human beings. As well as making the subject more engaging, he also helps them to develop some self-confidence. The character will remind you of that one really awesome teacher you had in high school.

Possibly the movie undermines some of this by going all Patch Adams on us, as Keating’s unorthodox lessons gradually have less and less to do with English and he thus seems kind of bad at his job, such as when he teaches them how to walk in a non-conformist manner and stand on their desks, because that’ll show The System, or whatever. Here we start to side with the stuffy headmaster.

The film also follows several of his students and what they do with their newfound enthusiasm. One decides to go after a girl who has no interest in him, leading to some of the most awkward courtship scenes in the history of cinema. The other student subplots are more effective, and there are very good performances from young Ethan Hawke and Robert Sean Leonard (AKA Wilson from House), who hold their own alongside Williams.

All in all, this is a powerful movie that definitely warrants a recommendation. Be warned though: as with Good Will Hunting, it was already a potent tearjerker even when its star was still with us, and it’s doubly so now with the passing of the Captain.