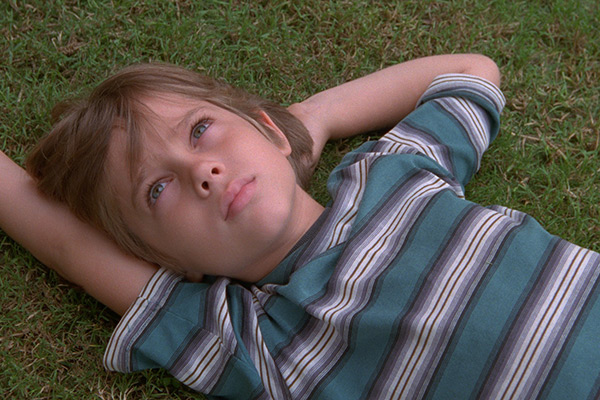 Boyhood is Richard Linklater’s ambitious project to film the same cast over a 12-year period to document the journey of fictional child Mason between ages 6 to 18. In true Linklater style, he makes it look easy.

The first time the film jumps ahead and I saw a noticeably older Mason, I was taken aback. Despite knowing very well that his development was the entire basis of the film, nothing can prepare you for how unusual and special it is to see a live-action, fictional character grow. After years of enduring the biopic’s tendency to have a 40-year old actor play one character from ages 14 to 90, it is mind-bogglingly luxurious not to have to suspend belief. Linklater always manages to keep the audience well orientated in the time period through diegetic music and references to technology, without any obnoxious sign-posting of the year.

It is fantastically refreshing to witness the life of an "ordinary" child, someone whose experiences and accomplishments are comparable to your own. That's not to say Mason doesn't endure traumatic events, but they are handled with the casualness and awkwardness of real life, rather than the melodrama of the typical "broken home" film.

Some actors fare better than others with the unique challenges of a 12-year journey. There were some scenes in particular that had to cover a lot of ground, and although many of the actors were able to make the clunky, expository dialogue sound like natural conversation, Patricia Arquette was not one of them. Whenever her character was put in a dramatic situation her performance was beautiful, but place her in an everyday conversation and she sounded like she was reading off a teleprompter. Ethan Hawke picked up her slack and made every scene he was in better with his "lovely but lazy" father act. But the real star is Ellar Coltrane as the boy in question; his sensitive and understated performance made him a kid you wanted to spend 12 years with.

Boyhood is an extremely special cinematic experience: unusual, soulful and optimistic. See it on the big screen if you can.