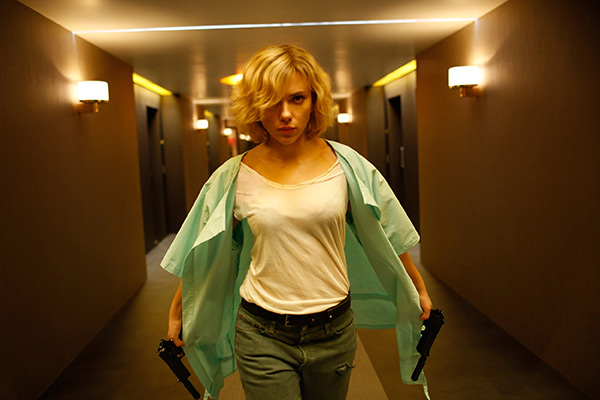 Luc Besson had been directing and writing powerhouse female protagonists since 1990’s La Femme Nikita. Lucy is evidence of 24 years of experience. His French sensibilities with cinema make for an engaging experience.

Lucy is a fairly typical student put into the wrong place at the wrong time and then, BAM, she becomes the most intelligent person to ever have lived. As a result of ingesting a large dose of a new drug, she is able to access more of her brain than any person ever has before, and thus gains what are effectively superpowers, because science. We know so because Morgan Freeman tells us in a series of cutaway shots. He plays a leading contemporary neuroscientist lecturing at an unnamed university. Let’s face it: Otago probably couldn’t afford him.

My personal brand of feminism was really enthralled by this character. Scarlett Johansson is a phenomenally beautiful woman and yet her character is not based on this, it’s inconsequential, like, you know, real life. ScarJo, as per usual, is a strong, fascinating and totally believable character, even while playing someone that could have walked out of a trashy comic book.

There were some excellent uses of film techniques familiar to the action genre, which I think is what makes this film exceptional. It is an action movie, with elements of sci-fi. Yet its take on the genre, in particular the treatment of women and race, was deftly navigated.

The “science” felt pretty weak at times and there were some plot hole issues as problematic as Transcendence. More depth into things might have made the overall experience a little more satisfying. But, that said, it’s a short, sharp, sweet flick. Coming in at just under an hour and a half, I think it did exactly what it was meant to.

Really, I thought it was just great. I left feeling like a super hero. The ending puts the power into the hands of the viewer, so if you’re willing to invest in this one, you’ll come out feeling like genius.