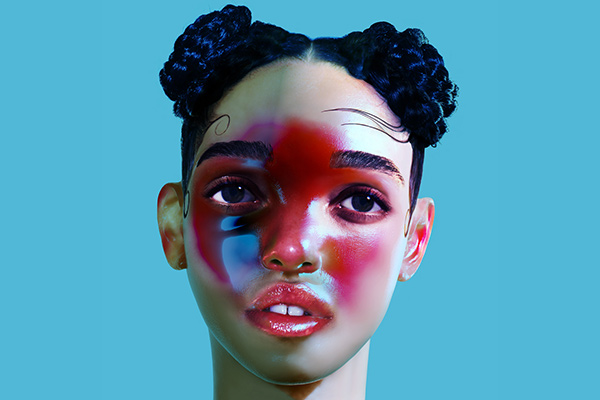 "I love another, and thus I hate myself,” Tahliah Barnett (FKA Twigs) chants over the first two minutes of LP1. Her delivery is bold. Her voice warped and affected. Layer upon layer, resembling a sort of Kate Bush, alien choir. If there is a phrase or message that conveys the essence of this album, it’s this wrenching mantra.

You can almost feel the potent insecurity underpinning those words. Laid open, shameless and bare. Heart-breaking in its tragic bluntness. It's not quite the type of self-loathing or self-hatred that cripples, however, but one that continues to strive, almost as if hounding some unattainable sense of perfection. This is not your typical, slightly pathetic, pity party, angst-for-the-sake-of-it kind of deal. Instead these feelings seem to be seeded from a brutal, unrelenting ambition and a constant need for self-betterment.

“I love my music, so I want to produce, write, and serve my music. I've had to learn about EQ frequencies, and programming, and space, and clutter, and how to be a better piano or bass player, everything. You can have big aspirations, but then you realise your skill level or your insecurities are holding you back. So you start to hate yourself, because it's so frustrating!” Barnett expresses in an interview with Carrie Battan.

You can hear the meticulousness, production-wise. The jagged percussion, panned left to right, slicing in, out and across, through a sleek mixture of bass synth, digital effects and acoustic instruments. Her voice tender, strong, heavily produced but still dripping with emotion – almost as if she is retreating behind an otherworldly mask.

If you look at the image that graces the front of LP1, you'll find yourself locking eyes with a rather peculiar portrait of Barnett. Her presence is almost doll-like, from that strange sheen on her left cheek, to that cold, vacant stare. A feeling of artifice radiates from her cold, gleaming face. The almost alien-like nature of it emphasising the shell Barnett must become in order to conceal herself.

“When I trust you we can do it with the lights on” she sings on “Lights On,” an interesting look at the insecurities of having sex in full view of each other. This track is followed by album highlight “Two Weeks,” a green eyed, sensual, sexual, trip-hop ballad. “I can fuck you better than her,” Twigs croons. Reaching the climax with a masterful, sweeping bridge that references Air Supply.

“Pendulum” is the other major centrepiece of the album, with Barnett's subtle delivery, traversing and ultimately transcending a soundscape of sharp, wooden, staccato percussion. “I'm a sweet little love maker,” she sighs, as an ethereal array of synthesisers swoop and swell around her.

Clocking in at just over 40 minutes in length, LP1 is an insular pop album. Unique in terms of its blending of sounds, highlighted by Barnett's own voice. It is down-tempo, yet immersive and bombastic. It's epic, but intimate. Fragmented but still strangely cohesive.

“Is she that girl from the video?” Twigs sings on the song “Video Girl,” referencing her earlier claim to fame as a backup dancer in pop music videos. This record cements Tahliah Barnett's place as someone whose talent reaches far beyond that.
This article first appeared in Issue 20, 2014.
Posted 12:53am Monday 18th August 2014 by Adrian Ng.