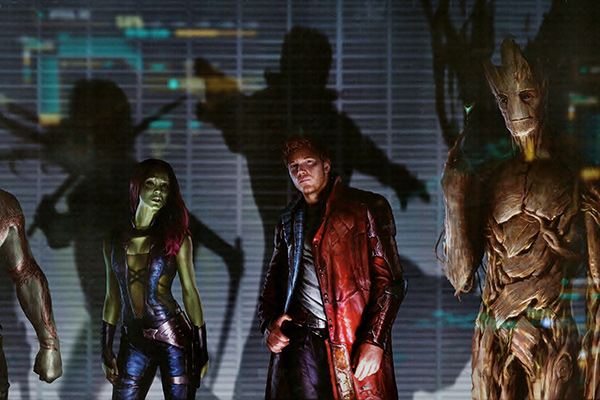 Guardians of the Galaxy

It was a big risk for Marvel to move their massive franchise into space. After all, the Space Opera is a swing-or-miss genre that began with one colossal hit, in the form of Star Wars, but has been predominantly misses in the 40 years since. The coming weeks will tell if Guardians is commercially a hit, but by God, let me tell you now, it sure as hell is a critical one in my books.

Based on one of Marvel’s lesser-known comic book franchises, Guardians of the Galaxy opens the scope of the cinematic universe to, well, the universe itself. The story starts when a young Peter Quill (Chris Pratt) is abducted into space, and then quickly jumps 26 years in the future, introducing Quill to us as the space outlaw he has grown up to become. He and an unlikely group of other outlaws, including the scheming and wise-cracking raccoon Rocket (Bradley Cooper) and the outrageously adorable tree man Groot (Vin Diesel), band together to overcome a threat to the universe.

James Gunn has accomplished with Guardians what every action movie tries and seldom few achieve, and that is melding comedy and action into an experience that is both exhilarating to watch while at the same time being awesomely fun. The movie expertly balances stunningly conceived and executed action sequences with scenes of dialogue and character development that you can not only enjoy, but also invest yourself in. So few films in this genre create dialogue-heavy moments that aren’t dull, awkward or entirely expositional. Gunn has created a movie (well, franchise, with the announcement of the sequel) that has characters and relationships that have you eagerly waiting for action sequences to finish, so that you can watch them interact once again.

It is not without great thought that I compare this movie to Star Wars. But the truth is, this movie is so exciting and fun that it has the potential to be this generation’s Star Wars. I am not normally a repeat viewer, but I am desperate to see this movie again!
This article first appeared in Issue 20, 2014.
Posted 12:53am Monday 18th August 2014 by Baz Macdonald.