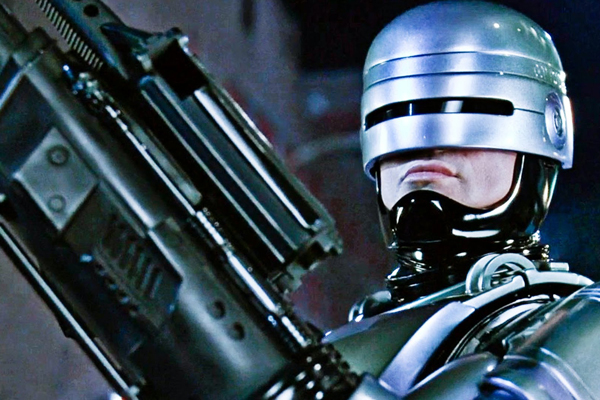 I can imagine watching the blood-soaked ridiculousness that is Robocop would be an incredibly rewarding experience while high.

Peter Weller plays Alex Murphy, a police officer that is brutally and graphically blown to pieces by criminals, his life saved when he is rebuilt (or resurrected?) as Robocop, a state of the art crime fighting machine designed by the mega corporation “OCP” (Omni Consumer Products) to end crime in the future version of Detroit. It is chock full of everything that makes a great cult film: over-the-top gore, great one-liners, and a preposterous plot, but what set this movie apart from other classic ‘80s films is its surprisingly complex themes regarding human nature.

The weakest part of this film is possibly the first half hour before Murphy becomes Robocop, which is less focused on the central character but instead the powers behind OCP and finding the solution to ending crime in the city. The first display of sci-fi in the film is the introduction of “ED-209,” the original crime fighting droid (with fantastically ‘80s stop motion effects) built by OCP. ED-209 was seemingly the solution to crime, until a malfunction causes the bloody death of an executive at the meeting. A junior executive at the meeting, unfazed by the death, uses ED-209’s failure as an opportunity to propose his Robocop program to the CEO. When Murphy was rebuilt as Robocop, his memory was erased in an effort to turn him into a machine unhindered by his human memories. Over the course of the film, Robocop slowly regains his memories of his old life, and the film ends with Robocop identifying himself as Murphy.

Robocop is, or was, a brilliantly original character and an icon of ‘80s science fiction, and the subtle humour and clever themes have ensured this movie a cult classic not likely to be forgotten. I have to mention the 2014 remake, which unlike the original, was a terribly bland film that lacked everything great the latter had, including an R18 rating. Don’t judge the original on that mess.
This article first appeared in Issue 19, 2014.
Posted 9:16pm Sunday 10th August 2014 by Ben Tomsett.