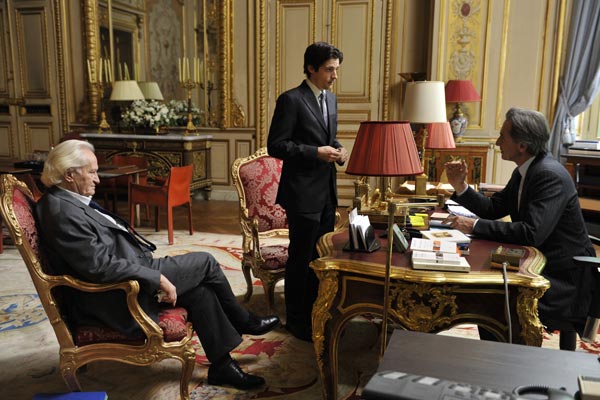 The French Minster joins other works such as the US TV show Veep that have clearly taken their inspiration from the popular UKTV series The Thick of It. These shows and films all portray important government figures through a satirical lens, which simultaneously undermines many democratic practices while also highlighting their importance to our modern world.

The French Minister follows a young bureaucrat, Arthur, as he becomes the speechwriter for the right wing Foreign Affairs Minister of France. However, very quickly the film becomes less about Arthur and more about the inner workings of this government body and the emergencies that they must deal with. Though this may sound dry, the satirical perspective makes the performances superbly engaging, and often hilarious.

Despite The French Minister’s similarities to other works, the French culture keeps the film feeling fresh. The jokes and performances have the arrogant wit and snap that the French are famous for, and the direction has a camp quality that is wholly unique.

In almost every way The French Minister is just as successful in its execution as Veep and The Thick of It. The trouble is that the movie is too much like its inspirations, in that it is structured and often feels like three episodes of a satirical TV show put together and published as a film. I found myself wishing that it was a TV show, so that the characters had a whole season to breathe and develop, instead of being jammed into a two-hour film where they could never be as fully realised. The movie also had a structure-less quality, constantly moving from one emergency to another, which would have been far more successful in the TV format.

I walked away from The French Minister feeling unsatisfied, not because the film was bad, but on the contrary, because I wanted to spend more time with it. In this generation where TV is quickly becoming as respected as film, creators need to think carefully about what medium their story would do best in. I think Tavernier simply picked wrong.
This article first appeared in Issue 18, 2014.
Posted 9:43pm Sunday 3rd August 2014 by Baz Macdonald.