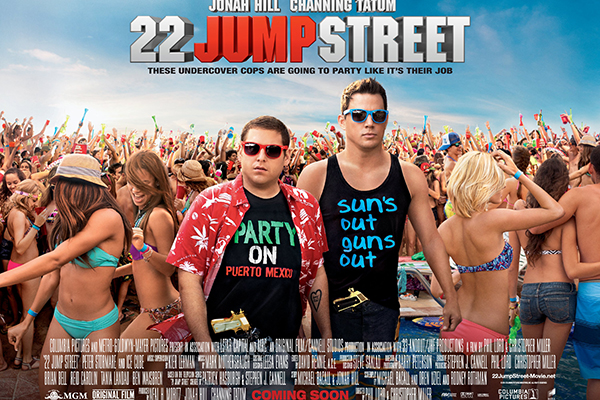 Anyone who has ever seen a sequel of almost any comedy movie ever made knows not to expect great things. They are usually a rehash of what worked the first time, though less original and less funny (see The Hangover Part II). What made 22 Jump Street such a great sequel was that directors Phil Lord and Christopher Miller were completely aware they were making a money-grabbing sequel.

The story was largely the same as the first film, but a change in setting from high school to college, and a hilariously self-aware script give this film enough originality to be arguably better than the first. Everything I loved about 21 Jump Street is present: the bro-mantic escapades of Jenko and Schmidt (Jonah Hill and Channing Tatum), references, cameos and throwbacks to and from other films, and the hilariously entertaining Captain Dickson (Ice Cube), who has a larger role this time. Jenko and Schmidt are once again sent undercover into a place of education following the arrival of a new drug, “WHYPHY,” and ordered to infiltrate the dealer and find the supplier. Captain Dickson’s advice for the pair is “it’s the same case, do the same thing.” The very clever script comes close to breaking the fourth wall multiple times, especially in the small scene involving Nick Offerman as Deputy Chief Hardy as he explains to the duo that the success of the first undercover operation (film) was a fluke, and now a lot of money has been invested in another attempt at replicating that success in another operation (film).

Aside from the heavy self-parodying humour, the film has a lot of heart brought by the real-life/onscreen bro-mance of Tatum and Hill that would make every guy wish they had a bro that tight. Ultimately, this is not only merely a great sequel, but a great movie in its own right. As the directors make evident in the awesome end-credits sequence, the Jump Street gold mine has well and truly been milked dry.
This article first appeared in Issue 15, 2014.
Posted 6:52pm Sunday 13th July 2014 by Ben Tomsett.