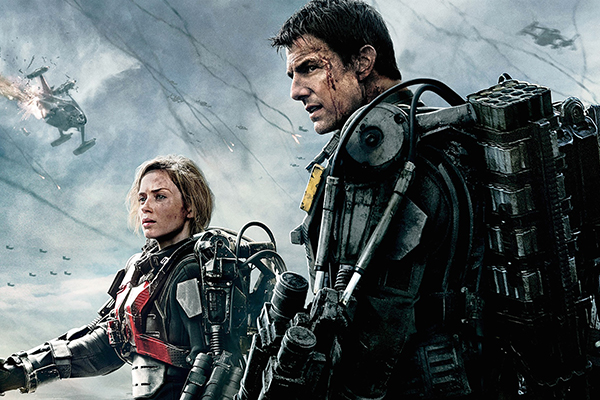 Edge of Tomorrow is one of those films that people will try and describe to you with 100 different similes, and though the film is “like” many different things, the truth is that it combines these factors to create a unique and gripping movie.

Edge of Tomorrow, based on the Japanese novel All You Need is Kill, tells the story of a dystopian future in which Europe has been invaded by an alien race. The movie is largely set the night before humankind’s last push against this alien threat on the beaches of Normandy. Major Cage, played by Tom Cruise, is thrown into the battle at the last minute, despite the fact that he has zero combat training. Needless to say, he dies promptly, however his first death triggers an alien event in which every time he dies he wakes up the day before the invasion and must relive the battle.

It’s easy to see many of the narratives influences, including WWII itself, and films such as Groundhog Day. I could also see many influences from the gaming industry including strategy platformers such as Super Meat Boy. However, these influences don’t make Edge of Tomorrow feel derivative; in fact the wide variety of these influences make the movie unique in both its narrative and tone. The story is utterly gripping; director Doug Liman did a superb job of avoiding the repetitive nature of the narrative becoming boring by injecting every repeat with a sense of progress and determination. It expertly jumps from emotional, to exhilarating, to hilarious.

Edge of Tomorrow was in my opinion a return to form for Tom Cruise. This movie throws away the angsty, brooding Cruise of recent years, and lets him do what he does best: be utterly charming. Forget for a minute that you know how weird he can be in real life, and remember the charming Cruise of Top Gun and Jerry Maguire: that’s the Cruise you are going to get in Edge of Tomorrow. Better yet, Cruise’s aptitude is not only matched but exceeded by Emily Blunt’s performance, who plays one of the most badass female leads since Ripley in Alien.
This article first appeared in Issue 15, 2014.
Posted 6:52pm Sunday 13th July 2014 by Baz Macdonald.