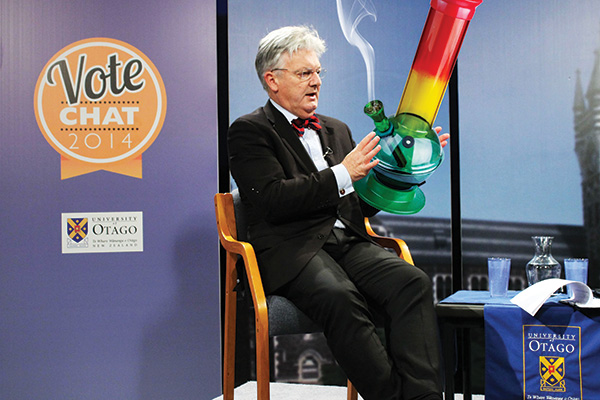 You were the President of the University of Canterbury Students’ Association, so obviously you would care a bit about student politics. What do you see as the biggest issues for students at the moment? Why should students vote for you; what would you do about those issues?

Well, if I go back to my experience, I was president of Canterbury the year that the students took over running the student union and broke away from the University and set up the basis that they’re autonomous and independent, etc. So I guess the first thing I’d say is trust people; this is the next generation of leaders coming through. I think that for students one of the issues that I’m quite concerned about, and I’ve been talking to NZUSA about it, is it’s not just about student representation; it’s about good governance of institutions and the contributions students make and how you get students interested and aware of and involved in governance. Because I think that’s important to the institution, but it’s also important for what they might do subsequently. So yeah, I have a particularly strong interest in that area.

I agree with that. Our voter turnout for OUSA last year was exceptionally high, historically, and it was only 25 per cent.

Yeah, well at one level it’s about who the student exec is and all of that sort of thing, but at another level it’s about what’s going on in departments, how students are being represented, how do those views then fit into the whole in terms of what’s coming up to the University council or whatever, and are those views more than just those idiosyncratic views of the particular individual? At the moment it’s almost quite easy to say, “That’s not the student view, that’s just his or her view,” and I think there’s a much greater role for students in governance.

Yeah, and thinking about it more generationally as well. Alright, so what’s your take on the student loan scheme and allowances and the like?

Well, look: at the moment we have a student loan scheme that I think works as well as it can within the circumstances, but I think fundamentally it’s time to look at what you want. And although the numbers don’t entirely add up, my argument would be to say let’s have no fees, or no fees borne by the students – the fees would still be imposed [but] effectively the cost is borne by having no student allowances, so you trade one off for the other. You allow students obviously to work part time and borrow for their living costs within the same parameters at the moment, but what that means is the cost of the loan comes down dramatically, and it doesn’t matter if you’re doing your first degree or a postgrad degree; the costs are broadly the same. It also puts pressure, because you’ve identified a fixed sum, a fees bucket, it puts pressure on the institutions in terms of what they want to impose. Because there will be people who stand outside the system. So the argument at the moment – someone in my office said to me the other day that when they began in their studies over the last seven or eight years, the fees per course was about $600. Now, it’s about $3,000. And so where’s the pressure on the institutions to keep their costs down? And I think that one of the trade-offs here is to say, if you’ve got a fixed bucket, okay Otago University or Canterbury or whatever, you justify your fees within that bucket.

It’s really interesting, when I first raised this, Vice Chancellors thought this was a great idea until they thought about what it meant to them. They said it was unfair, but they don’t mean to students – they mean to them.

Okay. So for you, your year has been an interesting one to follow. One thing that is relevant to the live-and-let-live attitude of students has been the legal highs. Now, we covered it quite extensively in Critic back in 2012, and I just wonder what’s going on? It’s been quite hard to follow, and it seems that it’s been portrayed as changing hugely but I don’t know that it necessarily has?

No, it hasn’t, and that’s the point I’m trying to make. That if you wind the clock back to this time last year, if we knew then what we know now I wouldn’t have had the interim regime. I would’ve said all products were off the shelf until they were proven to be safe. But I figured that since for some there was no visible perception of risk with, and I still think that’s the case, and therefore pragmatically you’d still let them stick around. The transition’s taken far longer than we anticipated because the testing regime takes time, and then when we had all this uproar early in the year led mostly by some local councils and others who had vested interests, I just felt that we were in danger of a situation occurring whereby the Government would say, “stuff it, we’ll just ban the whole lot.” Which is impractical, it doesn’t work, and it would’ve been disastrous because it would’ve driven the whole trade up. So that was why I thought, okay, there’s a pragmatic way through here, let’s just pull the ones that are on the shelves at the moment, say we’re just going to put them all into the testing regime, and so that’s what we’ve done. People say, “Oh, you’ve done a u-turn, you’ve introduced a ban, you’ve done all the things you said you’d never do,” but no, all we did was say that those interim products have had their approvals withdrawn.

Well, you’ll find this question to be another tired old tune – you’re a liberal centrist party. I feel like the tide is turning in the wider population’s opinion on marijuana. How do you match up this public opinion with the supposed evidence you have for its hazards?

Well, we need to be evidence based, and I’m aware of some polling that’s going to come out shortly that shows the public tide has turned far less than people think. But for me it’s the evidence, and if the evidence was there … The argument that you’ve let alcohol out of the stable and you’ve let tobacco out, well you’re going back hundreds of years there and I don’t think those arguments still apply. But if you say, well, if you’re talking purely about safety and risk, if the evidence was there that there is no risk or there’s very little risk or there’s no threat to safety, then for me it doesn’t matter whether it’s marijuana or something more serious – that should be the governing point. But my role, as Associate Minister of Health, is to protect the public interest in terms of protecting the public’s safety. Exactly as it is with psychoactives and the slightly different situation with tobacco and alcohol.

All right, so, back to the centrist thing. In the unlikely scenario that they’re in a position to form a government, would you look at going into government with Labour and the Greens?

Well I’ll tell you what my answer is to that. I’ve never ever, with any government, seen this in terms of “this group or that group.” It’s about policies. And it’s about policy compatibility. Now, that’s on two sides. On the one hand they may agree to do some things that we want to do; on the other side is would the price be one that’s too high to pay? Now, I made a pretty strong stand throughout my career of opposing high taxes, opposing things like capital gains taxes, and so they are central to Labour’s campaign, and so the idea of saying “oh yeah, I’ll actually vote with you and for those things that I’ve strongly opposed,” is pretty difficult. That’s what it comes down to, and there’d be other examples.

Cool. Well, that’s all the questions I’ve got for this short amount of time, but to do the student media thing and throw you a curve-ball… I’ve gone a bit left-field on this one. Back in 2012 when we were following the legal highs, we took particular pride in Photoshopping you (pulls out defamatory poster – see page five. “Ah!”) and I was wondering if you’d sign this?

Sure! I haven’t smoked a tobacco cigarette since 1971, and it would be a little less time but probably since the 70s that I’ve smoked any form of cigarette, so … Do I just sign it up here?