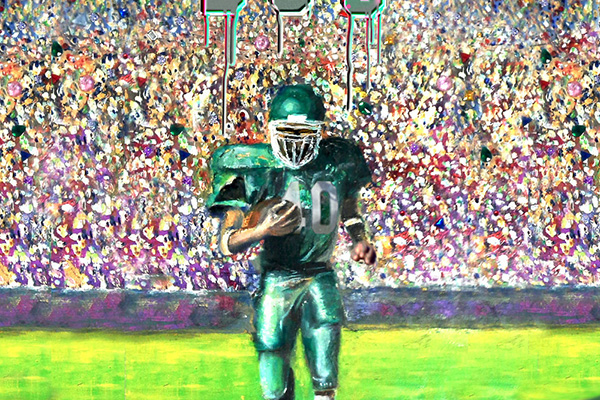 Though DSU is Alex Giannascoli’s first album to be released on Brooklyn-based label Orchid Tapes, it’s the sixth to be uploaded to the 21-year-old’s Bandcamp page (where you can get it for free!). I first heard Alex G’s music through a girl I used to follow on tumblr who would post clips, recordings or photos of him almost every day. From what I can tell, neither her behaviour nor my method of discovery were out of the ordinary, as Giannascoli’s music continues to spread through a small-but-growing die-hard internet fanbase. His latest LP is arguably his most cohesive and well produced, though it is definitely worth going through that five album back catalogue to find gems like “Change” (from Trick) or “Dust” (Winner).

In the past I’ve described Alex G to friends as “a poppy Elliott Smith” and while this remains somewhat applicable, DSU sees Giannascoli moving away from the simple layered vocal and guitar tracks that drew the comparison and moving towards his own distinct style. Whether it’s interesting instrumental choices, like the flutes on standout track “Harvey” or pitch-shifted vocals (“Rejoyce”), Alex creates a diversity in sound that was often missing from his earlier releases. However, the Smith influence can still be heard in his whispery, layered vocal delivery and instinctual ear for melody. Giannascoli’s sound is heavily indebted to ‘90s indie, with echoes of Modest Mouse (see “Serpent is Lord”) and Built to Spill.

The strength of this album lies mostly in the music, with not a lot of really affecting lyrical content; often Alex’s words seem to exist purely as a means of carrying the melody. This is a shame because he’s proven with previous releases just how well he can write (see “Be Kind” or “Break” – both unreleased tracks worth finding on YouTube). Regardless, this record sees Alex G finding his voice, producing eleven good tracks, and two great ones.