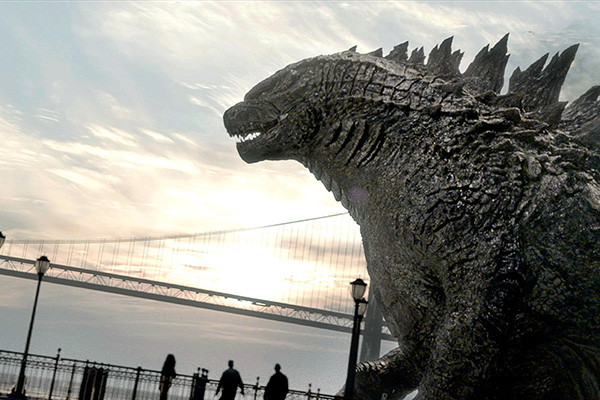 For those unfamiliar with one of film’s longest living monster icons, the eponymous creature first appeared in the 1954 Japanese film Godzilla. A lizard mutated to colossal proportions by radiation, Godzilla allowed Japanese moviemakers to express their concerns about mutagenic radioactive power in a way that would both speak to Japanese audiences, while also being sensitive to the fresh wound of the destruction of Hiroshima and Nagasaki. 70 years later, director Gareth Edwards too is using Godzilla to voice concerns about our global attitude towards radiation, while also creating one of the most spectacular monster movies ever made in the process.

You often hear the term “jaw-dropping” being thrown around. I always thought that it was just one of those silly hyperbolic phrases which people use to describe something spectacular. However, Godzilla has given me a new perspective on the phrase, as there were moments in which my mouth literally dropped, leaving me staring at the screen in amazement while probably looking like a slack-jawed idiot.

Gareth Edwards’ Godzilla truly nails the scale, spectacle and grandeur that these genre films hope to incite. The true beauty of the movie came from how much thought had been put into the physiology of the monsters and how that affected their movement, both in travelling and in combat. This creates some incredibly dynamic action sequences, which feel both mind-bogglingly epic in scale, while also being firmly grounded in physics.

Unfortunately the human stories revolving around these monsters are not at all awe-inspiring. Either the action follows the human characters in a way which feels very forced and strangely coincidental, or the characters make decisions which puts them in the middle of the action, which is absurd considering the carnage awaiting them. The exception to this is Bryan Cranston’s portrayal of Joe Brody. The narrative behind Brody is by far the most engaging and organic, and is brought to life by Cranston’s continued unmatchable acting calibre.

Godzilla has set a new standard for monster films in terms of the thought and execution behind CGI creatures. It is a shame that the human aspects of the story didn’t always live up to this standard, but this is still a spectacle you don’t want to miss.
This article first appeared in Issue 13, 2014.
Posted 2:07pm Sunday 25th May 2014 by Baz Macdonald.