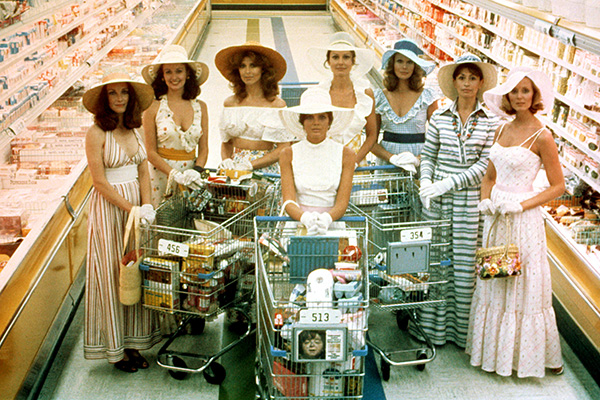 No, I am not referring to the 2004 Nicole Kidman monstrosity that left us all cold and more than a little bit confused. The original 1975 The Stepford Wives was everything the remake was not – brave, tense and extremely unnerving. Unlike the (attempted comedy) of Frank Oz’s remake, Bryan Forbes was loyal to Ira Levin’s book of the same name and made the town of Stepford a hauntingly bizarre and dangerous place.

Joanna Eberhart (Katherine Ross) is a smart and politically minded young mother who is persuaded by her husband, Walter, to move from New York to the idyllic suburb of Stepford, for the benefit of their two children. As soon as they arrive it is obvious that something strange is going on: all of the husbands belong to the mysterious and overtly sexist Stepford Men’s Association; the women are completely preoccupied with housework; and the town has taken a suspicious interest in Joanna and her apparent free-will. Joanna is lucky to meet Bobby, a sassy as hell new Stepford resident who is also shocked and dismayed by her neighbours’ behaviour. The two of them begin to investigate the dark secrets of their peers, but not without fatal consequences …

That’s right; women are being slaughtered in this film, much unlike Oz’s diluted remake, in which all of the lady robots can be switched back to consciousness in a press of a button (is that optimistic or pathetic?). Perhaps one of the most disturbing scenes of the original is when Joanna and Bobby overhear their neighbours having sex, and are scared shitless by the wife’s disturbingly subservient bedroom talk; a moment Oz destroyed in his own version by posing the situation as hilarious. It’s a real pity most people of our generation associate the title The Stepford Wives with Oz’s pointless, pretty powder puff of a movie, as the original took such brave narrative measures to deliver a raw and very scary social commentary. That’s not to say the 2004 version isn’t worth a watch – it is unintentionally hilarious – but be warned, it is also highly offensive to women, the LBGT community and people with eyes and ears.