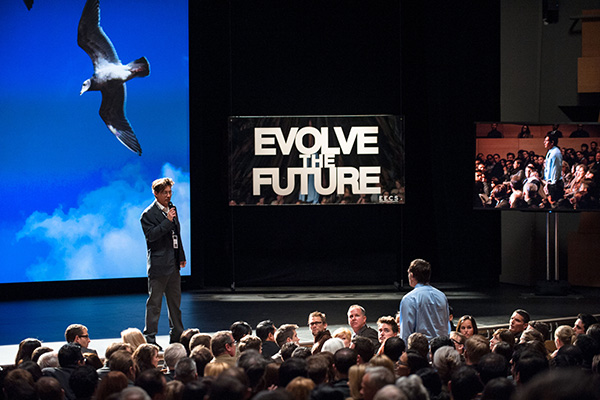 Transcendence raises a lot of questions. Why was no one prosecuted for the excessive law breaking? How did the terrorists and the FBI become buddies? Why am I so bothered by the slow-mo shot of water droplets falling off a sunflower?

Johnny Depp is the smartest computer geek in the world and everyone is in love with him; his wife helps him put his cuff links on, his friends laugh at his quirky facial expressions … You know, super cutesy things like that. Life is pretty swell for old Johnny, until he admits that he is building a supercomputer infinitely more intelligent than the combined minds of every person ever, which gets him shot. In the interest of avoiding spoilers I won’t say too much more on the plot, except that about a third of the way through the film you will know who to cast if you’re ever doing a Hell Raiser re-make. Seriously, I laughed out loud, and inappropriately, when they showed Mr Depp, head bald and covered in pins (I think they were actually electrodes but the similarity was delightful).

My inappropriate laughter became frequent, much to the dismay of my fellow cinemagoers, but I couldn’t help it. The problem with this film is that it has a lot of lofty aspirations and wants to touch on them very seriously. But the execution lacks gravity; a lot of the dialogue isn’t believable, the special effects (which are actually pretty cool) are used too often, and the parameters of the film’s universe continually extend and change. The suspension of my disbelief eventually gave way and I just ended up going along for the ride and a giggle.

This film, in spite of its issues, is a really entertaining watch. There are some great moments: Morgan Freeman does some voice-overs; things rebuild themselves using Nanotechnology; and did I mention that there’s a scene where Jonny Depp does a Hell Raiser impersonation? Classic.
This article first appeared in Issue 12, 2014.
Posted 4:32pm Sunday 18th May 2014 by Sydney Lehman.