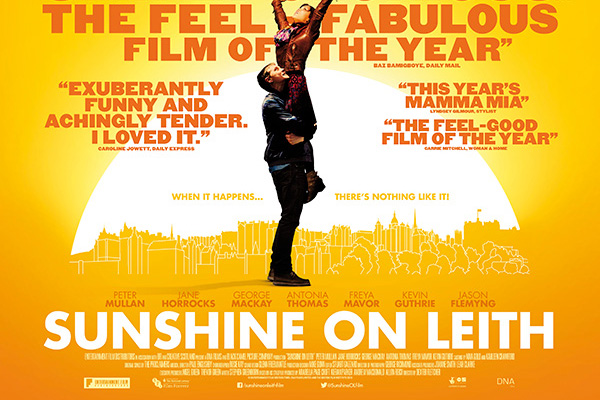 You may know the Proclaimers as those Scottish guys who sang “I would walk 500 miles, and I would walk 500 more, just to be the man who walked a thousand miles before I’m at your door.” Yeah, you know what I’m talking about. Turns out they have heaps of other songs, and are really super rich because someone made a musical out of all the songs. AND NOW IT’S A FILM. I know, right – how does this shit get past us?

Sunshine on Leith is not like the film musicals we’re used to – it’s not set during the French Revolution, or in a 1920s women’s prison, or a historic whore-house, but a quiet and deeply middle class suburb of Edinburgh, with characters that could easily be based on your own family. There’s no denying, it’s not the most exhilarating thing I’ve ever seen, and I did at one point become quite overwhelmed by the sheer ordinariness of it all, but this film just feels good to watch. It’s like eating hearty tomato soup … through your eyes.

Initially, the normality made it difficult to accept when people spontaneously broke into song and choreographed dance routines (it just feels right in the Moulin Rouge – not so much in a dairy) but the startling WTF?! moments are neutralised by having characters largely singing in situations you might expect someone to, such as during a public speech or in a pub. However, whenever they diverged too far from reality and attempted more artificial theatrics, it just got awkward. Thankfully, these scenes are few and far between and once you know that every remotely important point in the narrative will be accompanied by song you start to love it. Hell, you start to crave it.

No one in the cast is a blow your socks off singer, and there’s no doubt you could recreate the dance moves in your bedroom, but the characters are good, honest people, and they will make you FEEL. Sure, this is a movie for your mum, but mums are nice, and clever and sweet, just like Sunshine on Leith. Naw.
This article first appeared in Issue 12, 2014.
Posted 4:32pm Sunday 18th May 2014 by Rosie Howells.