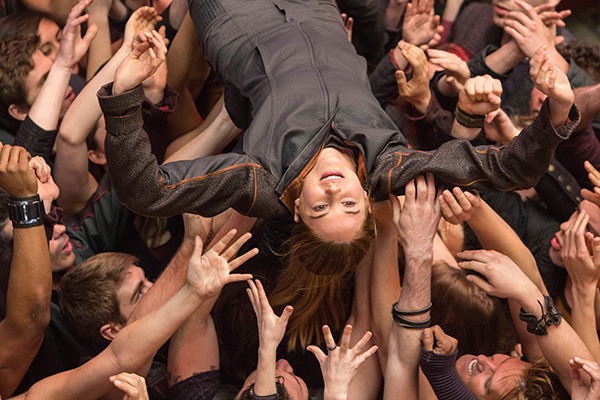 I have to admit, my expectations were not soaring for Divergent, as all the pre-release chatter seemed to indicate it was some kind of poor man’s Hunger Games but with way more leather jackets. Although this is partly true (so many cows died in the making of this film), I have to say I was pleasantly surprised with this sci-fi-meets-revolution-meets-tween-make-out film.

Divergent is based on the book of the same name by Veronica Roth. The story paints a picture of post-apocalyptic Chicago that, in order to keep the peace, has divided its residents into five factions according to their strengths – honesty, intelligence, bravery, selflessness and peacefulness (Where’s creative? Who’s designing all the cute post-punk leather jackets?). Disaster strikes when the our leading lady, Beatrice (Shailene Woodly), fails the test that determines what faction one should belong to, meaning she does not fit a category but is –wait for it – DIVERGENT! As well as being hunted for her non-conformity, it’s suddenly in her hands to save her society from fascism. Naturally. This is not the kind of filmic game I usually hunt but I couldn’t help myself: I was enthralled. Even though I knew they were not going to kill or maim our protagonist with a sequel already in the works, I was worried for her safety, genuinely had no idea what would happen next and even shed a tear, for God’s sake. And without giving too much away, it was refreshing to see character types who aren’t usually seen wielding a gun, doing just that.

Sure, it felt a lot like The Hunger Games, but it borrowed all the best stuff – the social commentary, and the badass female protagonist and “little guy” taking down the system. Unfortunately, it also inherited The Hunger Games’ desire to have the leading lady (at every available interval) pashing a guy who could easily moonlight as an underwear model. I for one eagerly wait for the day when films about young women “finding themselves” exclude her getting laid. Until then, we have Divergent. Which, all things considered, is pretty damn watchable.
This article first appeared in Issue 11, 2014.
Posted 3:11pm Sunday 11th May 2014 by Rosie Howells.