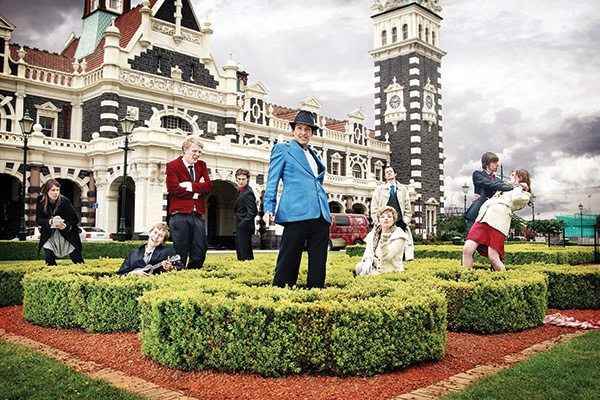 Give me a quick background of Improsaurus!

We are a local Dunedin improv group that performs fortnightly shows at the Fortune Theatre Studio. We have been there for a little over the last two years, and then two years before that at various venues around Dunedin ‘til we got offered the space at the Fortune. If you’re not familiar with improv at all, you’ve probably heard of or seen things like Whose Line Is It Anyway?. That’s not exactly what we do, we specialise in what’s called long-form, which is hour-and-a-half-long plays completely made up on the spot, so it follows recurring characters, recurring themes throughout, all based off the audience’s suggestions at the very beginning. So there’s short-form like Whose Line Is It Anyway?, and a lot of improv competitions that you’ll see, like theatre sports [that are like that]; lots of games, it’s about being as witty as possible and as funny as possible and as quickly as possible. Meanwhile, long-form improv is about developing characters, storyline, etc., as if you were going to see a play of that theme. Now, a lot of the humour comes from the fact that it’s all made up on the spot, and what we pride ourselves on is we don’t focus on the humour, we focus on the story line and the characters and all the humour comes from that because it’s really funny to see that, especially with some of the absurd situations which your audience members put you in – like when you ask “where am I?” and you suddenly get “underground laboratory.”

Do you pause and ask these things midway through or …?

Depends on the format of the show. So every fortnight – and that’s another thing we pride ourselves on is we don’t recycle formats – every fortnight we come up with a completely new format and bring it, so that’s a general theme that can be a genre or an archetype or a type of story and/or author – we’ve done Dickens shows and things like that – so we’ll base the theme off that, and from there the technique within is up to the formatter to decide. So sometimes you’ll have everything at the very beginning – your character, profession, relationships between, locations, things like that – and sometimes it will be interspersed throughout the show, just to make it very obvious that we don’t have anything planned or know what we’re doing. When we come back from half time we always have a big “ask-for” (when we ask the audience for something). When we return from half time, we always have to ask one so it’s obvious that we weren’t just spending the last ten minutes planning. The half-time break is for you to go get a drink; it’s not for us to plan.

And how’s the attendance?

There’s a capacity of 100 in the studio space; we’ve never been under thirty on a bad night, and we’ll sell out generally one or two shows a season – seasons being about five shows – which we just do for marketing. Our average is about 70 people, which is great for 10:30 at night on Friday in Dunedin. But it’s a lot of our regular audience members. You come, and then you want to come again because you don’t know what to expect.

So has it been an on going troupe? How long do people stay, what’s the process of getting involved?

The troupe rotates quite a lot. There are three or four members who have been there from the very beginning, but other than that it has all rotated. We tend to stay at around 11 people in total – six per show is the average and people leave, they go overseas, they go to Wellington, they disappear, and we get new members in. Other than the Friday shows, we run Monday open workshops at the OUSA Recreation Centre, [which are] free, anybody can come and just learn the skills of improv and long-form. Because improv skills are not limited to improv, they’re useful every day for just dealing with people in situations. From that group, the most dedicated people and those that show the most growth are then invited to come along to our off-Friday, more professional rehearsals, and then from that, if they show potential, we’ll trial them in a show. And then if they’re great, which so far they always have been, we let them into the regular troupe. So it’s a gradual selection process where, if you come along to rehearsals and look like you show promise, we’ll bring you in closer and offer you a show.

In terms of people’s backgrounds, do they tend to have studied theatre or …?

Not many have actually studied theatre as a major – there are a couple of minors here and there. But we’ve had a handful of Med students, English, Linguistics, Commerce, kind of like Capping Show we will accept folks from all walks of life. And the thing is non-theatre people tend to be even better at it because they don’t have those preconceptions about how you’re meant to act. I wouldn’t say what we do is naturalistic, because it’s really not – a lot of these scenes we get are really absurd – but what we try to do is normalise that absurdity we get given and perform a show that would be as if a normal person was dealing with that situation. So the last one we did a couple of days ago was Horrornation Street and that was a low-income street but filled with monsters. But the fact that there were monsters wasn’t weird – it’s how they dealt with the world around themselves.

What’s your process for getting into character?

You get your situation and you jump straight into it. So whether that’s endowing your character with a physicality or a voice or a trait or endowing the environment all around you depends on what you get. Sometimes things are very apparent like, “what is my profession?” “A doctor.” Cool. So you start with the stereotype of a doctor and then as the other characters endow you with traits you start picking those up so, by the end of the first or second scene, you are a fully developed character. Sometimes it’s, “what is my favourite object?” “A mirror.” Got it. And then from the mirror you start pulling things like I’m really vain or I’ve got these issues – or something like that. So it’s all about pulling these extracts from objects and what you’re given to create your character. And again, the biggest fear is that people think that we’ve planned it all, but it’s also our biggest compliment – because we’ve done it well.

And how about this trip!

Yeah! So we’ve been invited to go to this AACT (American Association of Company Theatre), which runs these amateur theatre get-togethers. By amateur that simply means “not Broadway” – it’s not highly paid theatre. So it doesn’t mean we don’t know what we’re doing. This one is called AACT World Fest in Florida which happens every four years – and they have 17 different countries this year, and it’s just a representative troupe that can find their way to the States that’s invited and then everything’s provided once you’re there. The actual shows aren’t paid but everything around it is provided. And what we provide is the flights. And it’s just a way of showcasing unique and slightly personality-driven theatre that you wouldn’t be able to see on Broadway because it’s not the mainstream, it’s different forms and experiments. It’s not like we are representing New Zealand – we are going to show New Zealand theatre – it’s just troupes from different countries. So yeah, I was visiting family in the States about two or three years ago and visited a theatre and picked up the pamphlet. I made a mental note that when that comes around we should apply; it would be fun. And then they liked our stuff and what we did so they invited us over, and that’s why we’re heading over to show what Dunedin has created.

Cool. And how long is it?

It’s a 10-day festival, so we’re going for the middle section of June. We’re going to perform two full shows and run workshops every day to teach the other artists. All the workshops are for each other. So all day, every day, there are workshops of all the different groups. There’s Chinese mask-making and Nordic theatre and all these different workshops that you can go and attend, so it’s as much a learning experience for us as them learning what we do here. We do pride ourselves on our form of long-form and it is quite unique from a lot of what we’ve seen. We always try to go, wherever we go, to see their improv and it’s not a better or worse thing; it’s just a completely different style. Ours is not comedy-focused but is always funny because … somehow!

You said you have to pay your own flights. Is that as individuals?

Yes. So there are five members going and one of the conditions is that it’s a great opportunity, but the troupe can’t afford to pay for everyone’s return flights to the States. You’re going to have to initially put down some money and we’ll try to recoup as much as possible through fundraising and PledgeMe and things like that – we’re not expecting to get the $8,000-$10,000 in total of flight money as we put in, but to get back as much of that as possible. So we do have a PledgeMe up at the moment and it’s trying to get $3,000 back from it as donations. We’re also contacting Air New Zealand to see if by us representing New Zealand, and by flying Air New Zealand, if there’s a chance they can help us out a little bit.

And do you think this trip will give members of the troupe more opportunities in a wider sense?

Absolutely. Two members of the troupe are planning on extending their stay in the States and then going up to Canada for a while. One member of the troupe, I believe, is going to the Canadian branch of the Chicago School of Improvisation, which is the world-acknowledged best one to learn all the skills. And just by going there and being able to do all the workshops in this international community, and then bringing back the rest of the troupe to teach the people here in Dunedin at the free Monday night workshops, it’s all about the community of being able to take in and give back and then educate. Because it’s a lot of fun and anyone can improvise, you just need the experience and practice to do so.