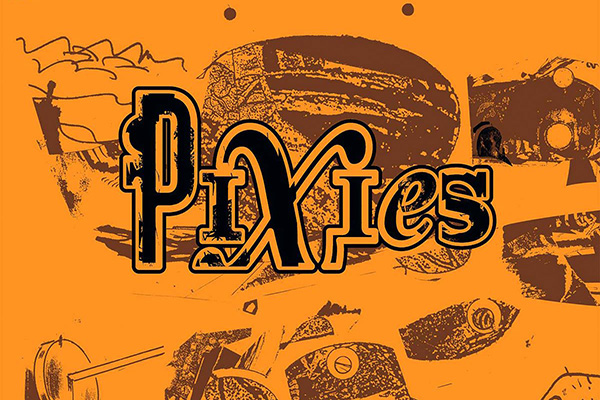 I could talk about buttoned-down shirt Dads shyly squeezing into old pairs of their black pipe jeans. I could talk about how the waistlines of their jeans pinch at their beer bellies, causing them to initially suck in for the “big gig night” with their old university buds (and how, after a few pints, they’ll let it all out). I could describe the Pixies’ new album, Indie Cindy, as a confident and unconstrained roll of beer belly. But that’s both mean and places the legendary Boston band into a suffocating regime dictated by strict (and naive) rules of how they should sound. Who cares how they should sound? Just let them sound!

Indie Cindy is the Pixies’ first studio album since Trompe Le Monde came out in 1991, and consists of a mix of tracks from their EP-1, released in 2013, as well as their EP-2 and three songs from EP-3, which were both released earlier this year. With Black Francis, Joey Santiago, David Lovering and Simon Archer on bass (Pixie co-founder Kim Deal left the band in 2013 and does not appear on this album), the resulting album has a classic Pixie-style in its shifts from loud to quiet both within songs and throughout the album, but it never quite achieves an edge that’ll keep the listener replaying.

“What Goes Boom” opens the album with a rock metal urgency (chilling out slightly as Black Francis pays tribute to Kim Deal, singing, “Kimmy and her bass/She really likes to get rockin’”). It is hectic - with an energy really only achieved again in “Blue Eyed Hexe.” In “Greens and Blues,” Francis’ enduring attachment to the extraterrestrial makes an appearance as he sings, “I said I’m human but you know I lied, I’m only visiting this shore.” This song provides the first hints of the tired-romantic sound that persists (and threatens to entirely embody) the album. Building on the first two songs, “Indie Cindy” grounds the mood of the album. This is a mood that conjures up an image of an older man road tripping across the States - driving during the night and spending the days in a worn down motel. He’s either running from or chasing a love that is never going to work out. At times the protagonist is overcome with almost a child-like frustration, but more often he slips into an exhausted state as he watches the dull, fluorescent lights of fast food chains pass by - over and over again - into monotony. This tired mood is particularly felt in the downbeat vocals and guitar of songs in the second part of the album.

While “Bagboy,” with its masculine spoken-word bite, and my personal favourite, “Magdalena 318,” with its sad, echo-y sound that drifts into moments of unearthly guitar by Joey Santiago, are interesting, Indie Cindy lacks something. Perhaps it’s the eclectic, sudden (and exhilarating) frenzies that youth, relative anonymity and Kim Deal (with her harmonies and eccentric bass) brought to the Pixies in the past. Or it could be a lack of inspiration. While repeat listenings in different settings and approaching it with a fresh mindset is recommended, keep in mind that the lonely driver may have come from somewhere but now he’s not going anywhere in particular.