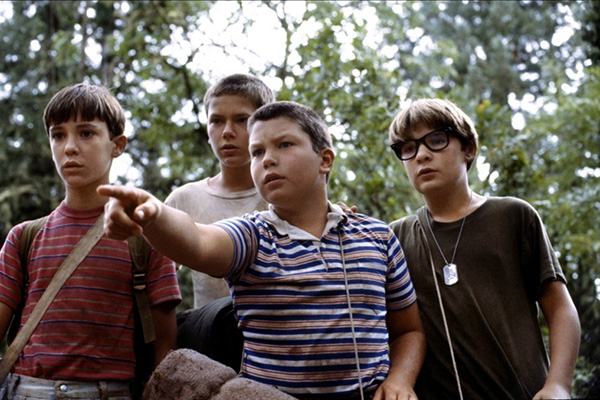 Alongside To Kill A Mockingbird, Stand By Me is by far the best film about children, for adults. Based on the Stephen King Novella The Body, Stand By Me tells the story of a ragtag group of young friends in the All American town of Castle Rock in 1959. After hearing about the rumoured location of a local missing boy’s dead body, the four 12-year-olds set out on a dangerous journey to witness it for themselves. The boys are a motley crew: there is the bookish and sensitive Gordie (Wil Wheaton), the chubby and timid Vern (Jerry O’Connell), the eccentric and unpredictable Teddy (Corey Feldman), and the cool kid Chris (River Phoneix).

There are so many iconic moments in Stand By Me it’s hard to know where to start: the boys getting attacked by leeches; the imaginary pie-eating contest; the near fatal train incident; Chris’ teary confession to Gordie that he doesn’t want to end up like his family … the list goes on. But there’s no denying the magic of this film comes from the four hilarious and touching child actors. Wheaton, who played our protagonist Gordie, stated in a 2011 interview that the genius of Stand By Me was how Rob Reiner cast boys who were basically their characters: Wheaton was “awkward and nerdy,” Jerry was “funny,” Corey was “incredibly angry,” and River was “cool, smart and really passionate.” At the end of Stand By Me, the audience hears what the boys become when they grew up and, hauntingly, many of the actors followed their characters fates: Wheaton became a writer, Feldman went off the rails with drug addiction and a questionable relationship with Michael Jackson, and Phoenix became the “it” boy of Hollywood, only to die of an accidental drug overdose at age 23. The big surprise is that the chubby, annoying O’Connell would grow to become a smoking hot babe. Who’d have thought?! At 28 years old, Stand By Me is all grown up, but still one of the most revered films of all time.