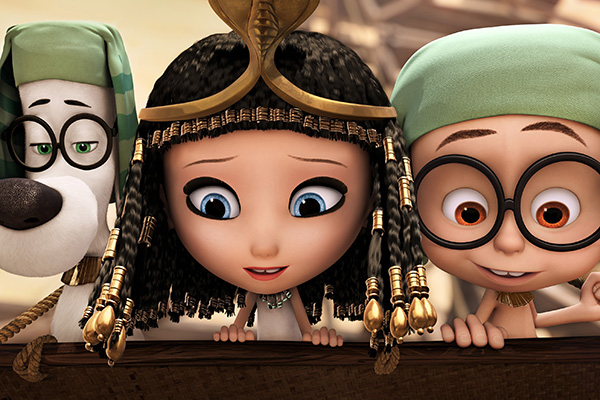 If you were anything like me, your childhood was full of cartoons. A personal favourite of mine was the 1960’s Rocky and Bullwinkle, a charming Cold War reactionary cartoon about a moose and a flying squirrel on the run from Russian spies. The show was made great by its excellent writing including witty puns, topical and intelligent comedy and self-referential humour. The show had a variety of additional characters, one of which was Mr. Peabody, the smartest dog in the world, and his adopted son, Sherman. 50 years later, Mr. Peabody and Sherman have gotten their own film and, thanks to Rob Minkoff, it is everything it should be and more.

If the name Rob Minkoff sounds familiar, it’s because he was the co-director of The Lion King, and that same prowess shows in this film. Mr. Peabody and Sherman is a delightful mixture of a long-dormant, but excellent, comedy style with a modern children’s film narrative. Children’s narrative sounds condescending, but it’s not. Mr. Peabody and Sherman is a film that stands with the revolution of clever, poignant and emotionally evocative children’s films that the Pixar generation has given us.

Mr. Peabody and Sherman’s latest adventure sees them travelling throughout time, visiting a variety of superbly conceived locations and moments of history. This partly allows for the expression of the cartoon’s function, which was for Mr. Peabody to teach Sherman about the world, but it also ties into a greater narrative. Though the narrative is excellent, the real charm of the movie comes from its tone and humour. It is refreshing to see something that feels so different from everything else being released.

All of these fantastical locations are held together by the movie’s breath-taking art style and finesse. Every scene has something different and beautiful to look at, and there are moments of truly innovative directing that bring the world to life.
Minkoff has successfully resurrected a classic with Mr. Peabody and Sherman by retaining what made these characters so great while also bringing them into the 21st century in a big way.