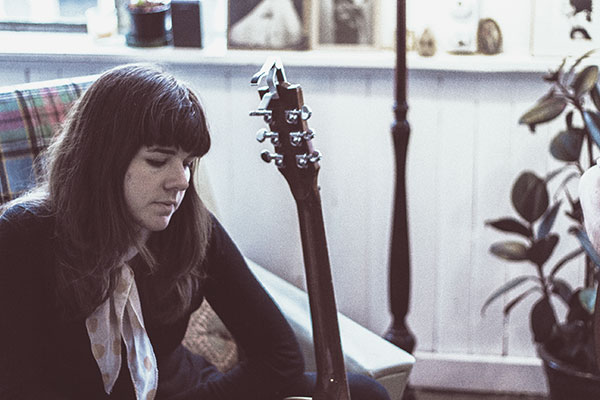 Holly Fullbrook, the talented songwriter behind Tiny Ruins, talks to Adrian Ng about her upbringing and David Lynch.

Your music gives me a strange sense of nostalgia. There’s quite a mystical, ancient quality to it. How do you interact with your music? Is there a certain mood you are trying to capture and immerse yourself in?
Thank you, that’s really cool. The only way I can explain how it feels for me is that I follow a bit of an Alice trail - writing, when it’s going well, is like half-remembering something from a dream you had, but it’s all in another language, something you have to crack. And a cloud sort of clears. Maybe the subconscious has a big part to play in it, I don’t know, because often it feels like a trance-like state when you’ve been repeating the same little guitar riff around and around and all these images sort of flash by. It’s like bringing something from the inside, out into the open, to feel like the outside isn’t so unrecognisable. It’s a mix of defence and surrender for me, because being vulnerable can actually make you feel a lot tougher. being honest about how it feels sometimes to be a human on this crazy planet is like setting the balance or something within yourself. After writing a song, it often feels like I’ve emerged stronger, and nothing anyone says can sway me. But then there’s also a huge feeling of doubt, when you re-visit the idea a few days later. There’s hard work and lots of drafts to every song and it can be frustrating and even dull. But at the end of the day, it’s just fun to play around on the guitar, for me.

Were there any special moments that sparked your love for music?
We found my mum’s old autoharp in the attic; it had quite a mystique to it - the fact it was boxed away, this beautiful thing. As a little kid, my nightly ritual was to sing all the songs I could remember out my window. I memorised the soundtracks to the few old films we were allowed to watch - Dick Van Dyck stuff. I loved the sound of the guitar, when mum played it on the rare occasion - the tapping of nails on the steel strings, smudgy fret noises from not much practice. She’d play old songs from a band she’d been in, songs her ex-boyfriend wrote. When I was 11, my Grandad unearthed that same guitar. Mum had broken her wrist and hadn’t played it in years. Grandad likes country music - Johnny Cash songs, schmoozy ballads, belting them out in his thick Devonshire accent, voice a low rumbling growl. He taught me the chords for “Amazing Grace” one day, and it was like an instantaneous love-at-first-play situation. I wanted to join in with the bunch of dudes at school who played Nirvana covers.

I grew up in Bristol, England until I was ten, and my first music teacher was a woman named Jane who introduced me to the cello when I was seven. I remember her house as being very dark and full of strange stuff - objects and furniture that always made me quieten down somehow. She was lovely but also quite stern – she demanded a lot of respect from me, which was quite a feat, as I was quite a wild little kid.

Hearing Beatles songs for the first time - once, sleepily, during the car-pool to school, it startled me into awakeness; once when a French exchange group sang “Michelle” in the school assembly; once lying on the floor of a grown-up’s party with my friend who had appendicitis. Jumping around the lounge with my brothers listening to the White Album as Mum did the ironing ... I found Beatles songs particularly mesmerising - I think lots of kids who hear them do - that mix of catchy, sentimental and bizarre. I felt like a bit of an outsider for liking the Beatles then - seems ridiculous now, claiming indignantly to have been a hard-core fan of the most popular, oft-mentioned band in history. I also remember falling in love with Nina Simone and Billie Holliday when I worked in this little second hand clothes shop in Titirangi one summer. I did a few hours on a Sunday, and the whole shop was mine to run. There were never any customers, but I cranked up the funny old collection of CDs there - jazz singers and all the French ones - Edith Piaf, theatrical wartime stuff.

For you, what usually evokes the urge to create? Films, conversations, emotions?
Nothing in particular, but all of those things definitely have urged me to write. You know that feeling when you’re on Wikipedia, and an article leads you into another and another and suddenly you feel like you’re going down quite a specific tunnel and finding out these startling things - if I ever get that feeling, it usually means it’s a trigger for me to write a song. Something about “discovery” or “epiphany” or “stopping dead in tracks,” “putting two and two together” - like cracking a sort of code I guess, it’s that feeling that I think to myself, “I need to grab some paper and jot all these thoughts down.” Just feeling curious about something, rather than the usual feeling of numbness or blandness.

Has playing internationally given you a new perspective when it comes to doing music as a profession?
I guess I’ve realised how hard it is, which I never quite contemplated before I began. I have heaps of respect for bands who make it over to NZ to play for us. It’s a long way and not economical. Touring is a slog, even for successful, or what appear to be successful, musicians. It takes a lot of patience, problem-solving, hardiness, and you have to let go of the idea that you will make money from it - all your cash goes straight back into the next thing ... but it’s a fun time as well.

I heard David Lynch really loves your music. David Lynch fan?
That was a crazy surprise. Yes, I’m a fan of his, from what I’ve seen. I loved Twin Peaks - I more or less watched the first series all in one go. The bass line from the theme song still comes to mind, especially when in small towns. Such a visual director - I can’t shake these really vivid images from his films.
This article first appeared in Issue 5, 2014.
Posted 5:30pm Sunday 23rd March 2014 by Adrian Ng.