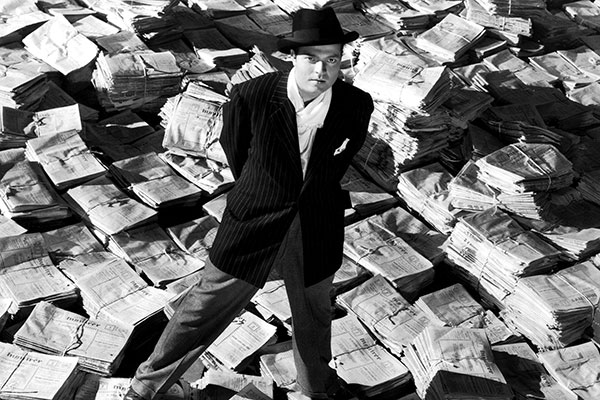 Sure, Orson Welles died an alcoholic, morbidly obese fruitcake suffering from a Hollywood induced depression, but that takes nothing away from the fact he wrote, produced, directed and starred in what is largely regarded to be the greatest film of all time. Citizen Kane is the cream of the crop, the teriyaki chicken of sushi, the Justin Timberlake of N-Sync, the Oscars of the award ceremonies; the best of the best.

After years of building his reputation in theatre and radio, Welles turned heads for producing a hauntingly realistic radio adaptation of H.G. Wells’ War of the Worlds. As the story goes, many of the listeners who missed the introduction believed Earth was actually under siege and began indulging in apocalyptic behaviours. Today, we know these tales of mass-hysteria to be wildly over-stated but 1930s Hollywood didn’t know that, and wanted a slice of the Orson. RKO Radio Pictures offered Welles what is now considered to be the best movie contract ever given to a debut director. Welles was granted full creative control over the script, cast, crew and, most amazingly, final cut of the film.

What he made was Citizen Kane. Loosely based on newspaper magnate William Randolph Hearst, the film told the story of megalomaniac Charles Foster Kane, and investigated why he chose the phrase “Rosebud” as his final words before sweet death. In 1941, society still needed convincing that film was an art form, and could offer anything different from radio or theatre. Nothing could have done this better than Citizen Kane – the film was a master-class in “smoke and mirrors” as Welles showcased everything only film can do. Citizen Kane was praised for its non-linear narrative, outrageous cinematography and innovative camera techniques.

But when you start at the top, there’s nowhere to go but down. Welles became increasingly disillusioned with Hollywood as he failed to obtain the creative control he was so unusually granted for his debut. Welles’ life sadly came to mimic that of his most famous character; as Citizen Kane concludes: “Mr. Kane was a man who got everything he wanted, and then lost it.”
This article first appeared in Issue 5, 2014.
Posted 5:30pm Sunday 23rd March 2014 by Rosie Howells.